Liverpool defender Martin Kelly has joined Crystal Palace on a permanent deal after agreeing terms and passing a medical at Selhurst Park, the club has confirmed. 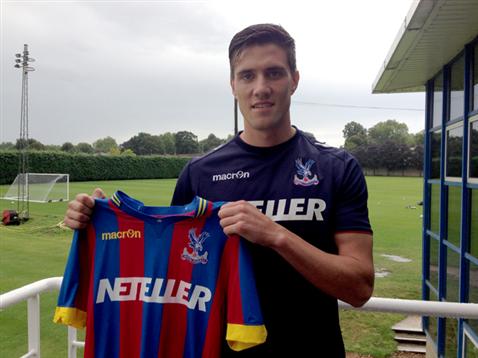 Kelly graduated from the Liverpool’s Academy system and made a total of 62 appearances for the Reds, scoring once. He was handed his first-team debut against PSV Eindhoven by Rafael Benitez in December 2008.

His rapid progress earned his one international cap as well to his name. The 24-year-old has put pen to paper on a three-year deal at Selhurst Park after passing a medical last night. He will wear the number 34 shirt for the Eagles and would be in contention to making his debut for his new club on the opening day of the Barclays Premier League season at Arsenal this weekend.

He told cpfc.co.uk: “I’m over the moon. It was a lot of travelling to get down yesterday, but I’m glad to have signed and I’m looking forward to the weekend.

“I’d heard about a potential move at the start of the summer, but I just wanted to concentrate on playing again in pre-season. I played a lot of games, which is what I needed. I’ve been out, fit, but not playing competitively all of last season.

“Now is the time at that age where I need to get back to playing week-in week-out.

“I remember coming here with Liverpool at the back end of last season to the 3-3 draw and the fans were incredible. That was one of the only stadiums I’ve come to where it felt like Liverpool fans the way they got behind the team on Champions League nights.

“But I’ve looked around the training ground and all the posters on the wall are about the team. That’s what I want, to play for a team.”