Finally the torture for Manchester United is set to be over. Portuguese winger Bebe is set to leave the Red Devils and join Benfica according to reports in newspapers from Portugal.

Here is a following snippet from  today’s edition of A Bola. 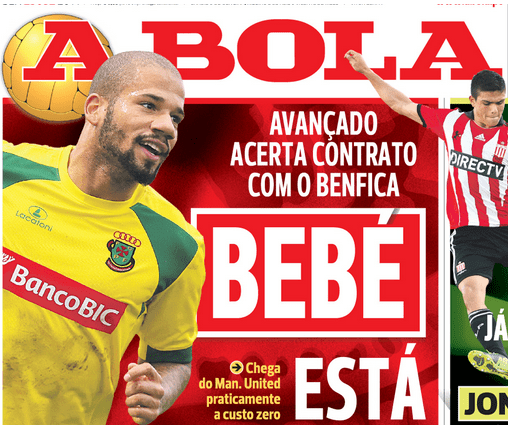 O Jogo has also confirmed that the 24 year old should be able to join the Europa League runners up by today. It is also believed that he is currently in Lisbon to finalize his move.

The player joined the Red Devils for around  £7.4 m in 2010 but failed to live up to the expectations at Old Trafford with many regarding the Portuguese as the biggest flop in Sir Alex Ferguson’s illustrious reign at the club.

The price of the deal hasn’t been quoted but it is believed that the player will make the move for a very meager sum or even for free.

Bebe scored 13 goals last season on loan at Pacos Ferreira but failed to make Paulo Bento’s side for the World Cup in Brazil.