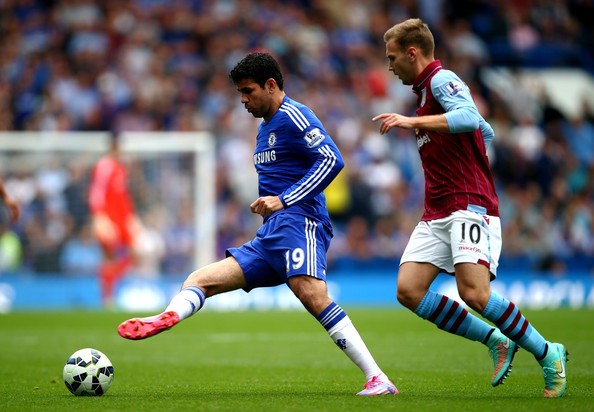 Diego Costa could be thrown into Champions League action on Tuesday evening, as Jose Mourinho seeks his first three points in Group G.

The Chelsea head coach says he will “risk” starting Costa in Tuesday’s away match against Sporting Lisbon, just days after revealing the £32 million summer signing has barely been training. “There is a risk, yes, but he plays,” said Mourinho. “Hopefully everything goes well. It’s an important game for us.”

The Blues were pinned back in their opening Champions League tie versus Schalke, emerging with only a single point, following a 1-1 draw. Struggling with a fragile hamstring, Costa was only able to appear as a second half substitute at Stamford Bridge. Nonetheless, it was painstakingly obvious that the club missed his prowess throughout the entirety of the match, as they lacked the penetration required to break down the Bundesliga outfit’s stern defence.

Had the Spaniard been introduced from the start, the Blues’ chances of securing three points would have significantly increased. After all, the club have won each and every game in which the 25-year-old has scored this term. His eighth goal of the season set up Saturday’s 3-0 win over Aston Villa, and despite his limited fitness, he currently leads the race for the Premier League Golden Boot.

The statistics recorded since Costa’s arrival in England are truly impressive. Thus far, he has hit the target from 83% of his total attempts, converting an incredible 44.4% of these strikes. He is undoubtedly the most clinical striker in the English football league, and only Real Madrid’s Cristiano Ronaldo has managed more goals across Europe’s top five divisions.

Chelsea face Arsenal in the Premier League this weekend and Costa’s fitness situation will naturally pose a concern as he prepares to start his second of three matches, in the space of just eight days. The Blues’ reliance on their star striker is becoming ever more obvious and he will be integral to the side’s chances of maintaining their unbeaten Premier League start; the tournament that surely remains Mourinho’s priority.

“Hopefully everything goes well and hopefully from Tuesday till Sunday he has enough period of time to be back again on track and to play against Arsenal (in the Premier League),” the Chelsea boss continued. “It’s an important game for us, a difficult game and if I can play my best players and the team I think is the best team to try to get the best result, I’m not going to make any change.”

Chelsea are favourites heading into tonight’s clash, despite playing away from home. Sporting also started their group campaign with a 1-1 draw against Maribor in Slovenia, with Manchester United loanee Nani scoring for the Portuguese side. The two teams are incomparable on paper and, undoubtedly, Jose Mourinho will be expecting his side to finish the group campaign at the top of the pile.