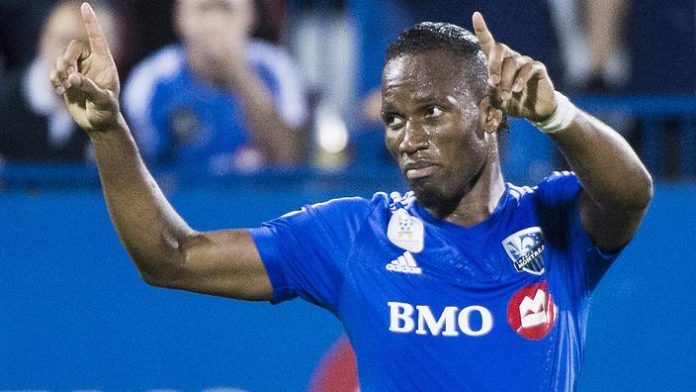 Chelsea legend, Didier Drogba, has announced that he will leave Montreal Impact at the end of the current Major League Soccer (MLS) season. The Ivorian was a second-half substitute in the team’s semi-final in the MLS Cup against Toronto FC last night. His team went on to win 3-2, with the return leg in Toronto on 30 November.

Speaking after the game, Drogba said, as quoted here by the BBC, that this was surely the last time he had played in front of the home fans:

There’s still one or maybe two games to go. Next week’s game is more important than if it’s finished or not.

Everyone knows it was my last game here. Now let’s focus on the semi-final.

The 38 year-old striker has not been a regular starter as of late for his club this season, after a combination of injuries and loss of form saw him lose his place. He scored 10 league goals in 22 appearances, compared to 11 in 11 last year.

The striker is most remembered for his time at Chelsea, for whom he scored 164 goals in two stints. Initially joining the Blues from Marseille in 2004, he capped off a brilliant 8 years at Stamford Bridge by scoring the winning penalty in the 2012 Champions League final, sealing a first ever triumph for Chelsea in the competition. He re-joined José Mourinho in West London in 2014, playing more of a mentor’s role. Despite being second-fiddle to Diego Costa, he managed 7 goals in all competitions and won his 4th Premier League title with the club.

Chelsea fans will eagerly wait for his announcement on his next career move. Frank Lampard has also announced his exit for MLS club, New York City FC, while John Terry is on the cusp of retirement, too. Maybe, the talismanic trio that was instrumental to a lot of the club’s success in the last decade will be a part of the coaching staff at Stamford Bridge before too long.