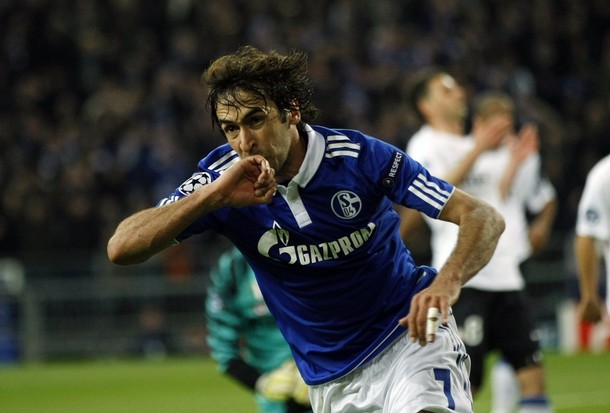 The European great who now adorns the blue of Schalke has transferred his Champions League pedigree over to The Miners who are now sitting proudly in the last four of the UEFA Champions League. With Chelsea being humbled by Manchester United in the quarter-finals, they lacked a killer instinct in the final third. With Raul being available on a free last summer, did Roman Abramovich miss a trick by not poaching the Spaniard?

Think about it, there is no denying that The Blues are obsessed with winning club football’s Holy Grail. That isn’t a negative aspect by any stretch of the imagination, it’s the complete opposite. Until Chelsea wins the Champions League they will just be known as a big club, rather than a great one. Abramovich implemented Carlo Ancelotti as the man to steer his Chelsea Empire to the promise land but thus far has been unsuccessful. However, the finger shouldn’t be entirely pointed at the manager as he wasn’t the man playing up top this past Tuesday night.

For large parts Chelsea played well at Old Trafford. They kept possession well and there was some lovely link up play up until the final third. Now had Raul been present would things have been different?

There is no denying had Chelsea acquired him last summer, the scrutiny surrounding the move would have been questioning his age, legs, fitness and adaptability to the blood and thunder of the Premier League. It may have been foreseen as just one last hoorah on the part of Raul to acquire his final pay cheque. Well if that was going to be the case, then one or two need to reassess their football knowledge. It would have been a masterstroke.

Sure, it may have taken time for Raul to adapt to English football, but that isn’t the problem. Chelsea want to win the Champions League, so who better to have in your side on a European night than Raul? Especially in the latter stages.

The man’s hunger and desire has to be admired. He opted to move to Schalke when he had other offers on the table. The key for him was playing at least one more season in his beloved competition. There was an opportunity to beat Gerd Muller’s European goal scoring record and rack up at least six more appearances in the group stage. He has not only achieved the aforementioned, but has done so quite formidably. He netted a brace last October in Tel Aviv to equal Muller’s record before smashing it in his native Spain against Valencia in the last-sixteen.

His influence in the quarter-final against European champions Inter was majestic. His link up play with his peers was exceptional and his movement was sublime. For a man of 33-years of age, he needs to rely on his brain rather than his legs, yet he still has the knack for being in the right place at the right time. He has been one of the season’s highlights in the competition, no doubt.

We can be forgiven to think that he would fade into obscurity with Schalke, but when you live and breathe the sport you love as Raul does, there is absolutely no chance of that occurring. He is a prime example, he was born to score.

When Chelsea paid Liverpool £50million for Fernando Torres in January, it was seen as the final piece in the jigsaw for the English champions to clinch their destiny. As we all know, it hasn’t worked out as yet. A reason for that being his similarities to Didier Drogba and Nicolas Anelka. Raul is a different entity, he’s a born goal-scorer. Chelsea want goals, who better to have – even if it was for the short-term. Raul could easily play in a 4-4-2 or 4-3-3 and would have no qualms. He’s played in umpteen different formations over the years in white, and yet his goals have never dried up.

The emergence of Gonzalo Higuain at Madrid last season shaded the Blancos legend but a change was obviously necessary for both the player and club. Raul has been rejuvenated in the Bundesliga, and despite Schalke languishing mid-table, they have made it to the final four in the Champions League, something which they only ever dreamed of before his arrival.

Chelsea will always be there or thereabouts in UEFA’s prime competition and by a law of averages their time should eventually come, but having Raul’s knowledge alone would be indispensable. A partnership between himself and Didier Drogba would have been harrowing to opposition defences around Europe.

It was only eight years ago that Mr Abramovich contemplated a £71million offer for Raul when he was in his prime. Heck, why don’t he try his luck in the summer with a cheeky offer to Schalke?