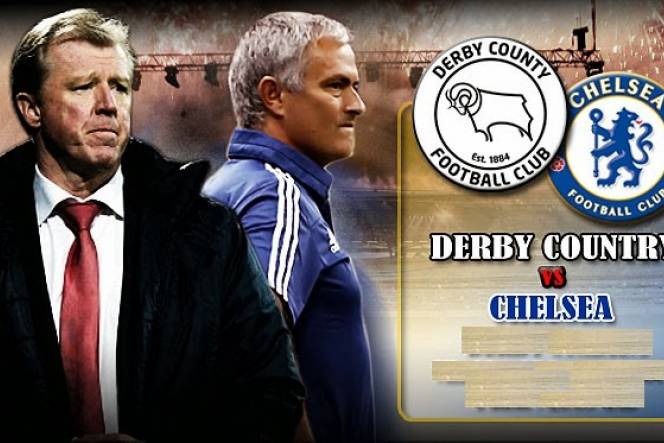 Chelsea travel to the iPro Stadium to take on Derby County in the quarter-finals of the Capital One Cup.

GOAL! Derby 0-1 Chelsea. The Blues take the lead midway through the first half through Eden Hazard, who finishes smartly for his 9th goal of the season.

Chelsea defender Kurt Zouma was stretchered off on the stroke of half-time following a clash with Petr Cech. The medics were slow to react, so Fabregas and Azpilicueta decided to help out.

The injury to the young Frenchman doesn’t look good.

GOAL! Derby 0-2 Chelsea. Left-back Filipe Luis scores his first goal for the club with a stunning free-kick from almost 30 yards.

GOAL! Derby 1-2 Chelsea. The hosts are back in it with 20 minutes to play through a fine strike by Craig Bryson.

Derby are reduced to 10 men.

GOAL! Derby 1-3 Chelsea. Andre Schurrle seals the deal for the visitors, 3 minutes after his side gained the man-advantage.

FULL TIME: Chelsea are through to the semi-finals of the Capital One Cup with a 3-1 win over Derby County.