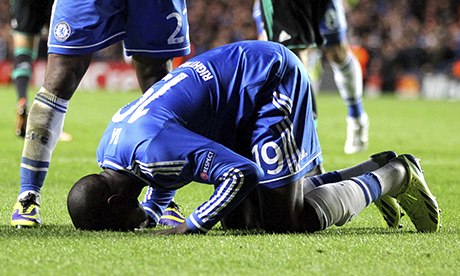 The sight of Demba lining up for Besiktas in tomorrow night’s Europa League match with Liverpool will only serve to remind fans of last season’s glorious failure after he capitalised on Steven Gerrard’s infamous slip to all but kill the Anfield side’s title hopes.

The Reds were firmly in control of the Premier League race before they lost to the Blues at Anfield – ultimately gifting the crown to Manchester City.

Brendan Rodgers’ men had controlled that match against Chelsea but were frustrated by a stern rearguard action from Jose Mourinho’s men. A draw, though, would still have left Liverpool as favourites to land their first English league title since 1990.

But that was all ruined by Ba’s goal following Gerrard’s slip after failing to control a simple short pass.

Things have moved on from last season with Liverpool back to challenging for the European places rather than the title, having sold Luis Suarez and lost Daniel Sturridge to injury for five months of the campaign.

Rodgers claims seeing Ba step out against Liverpool won’t remind him of last season’s agonising finish. “It won’t stimulate any bad memories for me. We see him as a threat and will pay him respect but nothing more than that,” he said.

“It’s just the same respect of being a very good player. He had a fruitful period in England. He’s got good touch good technique and scores goals. Has done well at Besiktas.”

Despite what Rodgers says, though, the sight of Ba is bound to evoke bad memories and feelings of “what if?” by many Liverpool supporters.