Deco has given a fascinating interview with Four Four Two where he discussed about his playing career, managers he like, his favourite players, idols, career with Porto, Chelsea and Barcelona and many more.

In the questionnaire session, a fan from Manchester wanted to know why he lost his way in the first season despite starting so brightly at Chelsea? Furthermore, why did he want to leave when Scolari was sacked? 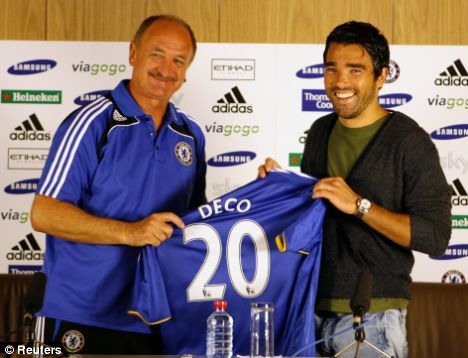 Deco reflected on the player-power at Chelsea that led to the sacking of Scolari which he says was “not good for a team”.

“It’s difficult to say. The first four months we were leading the Premier League, but we had a lot of problems with important players after that. Some players were not playing, and it’s really difficult to say what happened. I had a lot of options when I decided to leave Barcelona, and my decision was not because of Scolari. It’s because the club called me, I spoke with them and they wanted me there. Scolari was my coach in the national team and was my friend, but the decision was not because of him. In the end I was having personal problems with my family that meant I needed to go back to Brazil.

He is an emotional coach who needs to talk and express his feelings to the players. He couldn’t do that at Chelsea. Another thing was that at that time some players, if they had a problem with the coach, didn’t speak with him but instead communicated directly with the directors. That isn’t good for a team.”

In another question, Deco says that of all the managers that have played a significant part in his life, including the likes of Scolari and Ancelotti, he feels Jose Mourinho is the best of the lot.

He added: “For me, he was one of the best midfielders in the world and in history. It’s never easy in a big team, and he didn’t score a lot of goals, but he organised the team fantastically.”

You can read the full interview here.