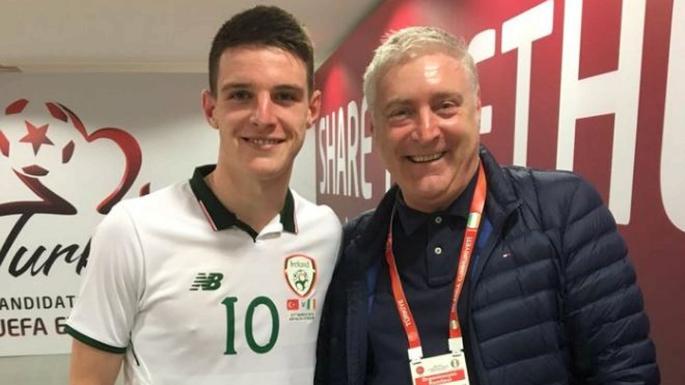 West Ham defender Declan Rice put up an assured performance in his national team debut for Ireland on Friday.

Ireland lost 1-0 against Turkey but Rice caught the attention with a brilliant performance in defence and later in midfield.

The 19-year-old made his first appearance for Martin O’Neill’s side and he says he was unfazed by the occasion.

After the match, the youngster took to social networking site Twitter to express his reaction. He was disappointed with the result, but at the same time was happy with the effort he put in.

Wasn’t the result we wanted tonight.. but on a personal level delighted to have picked up man of the match on my debut?☘. Very proud moment for me & my family. Big love to my dad who came all the way out to come and watch, love you❤? #COYBIG pic.twitter.com/Ic8S9epKBi

Rice is one of the brightest young talents coming up for West Ham and David Moyes will be very pleased with that effort.

This season he has made 18 appearances in the Premier League (seven starts), and has shown great maturity playing in defensive midfield role as well.

West Ham fans praised his performance on Twitter. Here are some of the selected tweets:

Declan delighted for ya ! Now kick on and get those irons pumping!

Delighted for you Declan and well deserved. I see you are number 10 are they looking to play you in the Messi role going forwards? ?⚒⚒⚒

Love it Dec! Absolutely delighted for you! Keep grafting ??⚒

You were a class above today Declan, didn’t look an inch out of place. Fully deserved man of the March award, I’m hoping to see many more of them in the Claret and Blue! #RiceRiceBaby ⚒ ??

Really proud of, and happy for you Deccers. Hope you have many more great events.???⚒

Congratulations, got to be proud with that. Full debut, man of the match and wearing the 10 shirt ??⚒