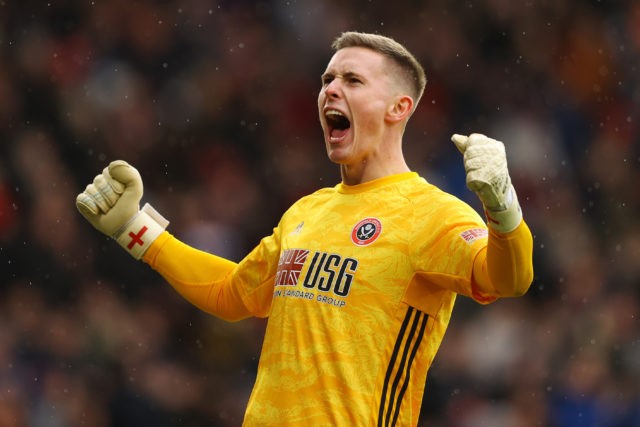 The Athletic journalist Laurie Whitwell has provided an insight into Dean Henderson’s future.

Henderson has been simply outstanding this season for Sheffield United this season and has made it to Jamie Carragher’s team of the year.

In terms of stats, the 23-year-old has the second-most clean sheets, with 10 (one behind Nick Pope), a save percentage of 75.56 (fourth in the Premier League) and an excellent ratio between goals conceded (22) and expected goals conceded (35.14).

However, it remains to be seen what Manchester United do with Henderson who has a contract at the club till 2022. He has certainly outperformed David de Gea but the Spaniard remains the first-choice goalkeeper at the club and is on £375k-per-week wages.

Sergio Romero is the second choice keeper at United and he has done well. So, where will Henderson fit in at Old Trafford?

Henderson is playing with loads of confidence at the moment and he will certainly not be willing to warm the bench at Manchester United.

The Athletic journalist while replying to questions from the United fans has claimed that his ‘gut feelings’ say that Henderson will go out on loan again, and most likely will return to Sheffield United.

“My gut feeling is that Henderson will go out on loan one more time, most likely back to Sheffield United for another season in the top flight, but would then want to challenge De Gea for the No 1 spot in earnest. He’s 23, so has years ahead of him. Certainly, he will not want to sit on the bench next season,” Whitwell wrote.

Henderson has established himself as one of the best goalkeepers in the Premier League, and the Blades wish to sign him permanently.

In March, The Sun reported that Sheffield United ‘would bid to buy’ Henderson in the summer transfer window, but a loan move is still the best option for them.