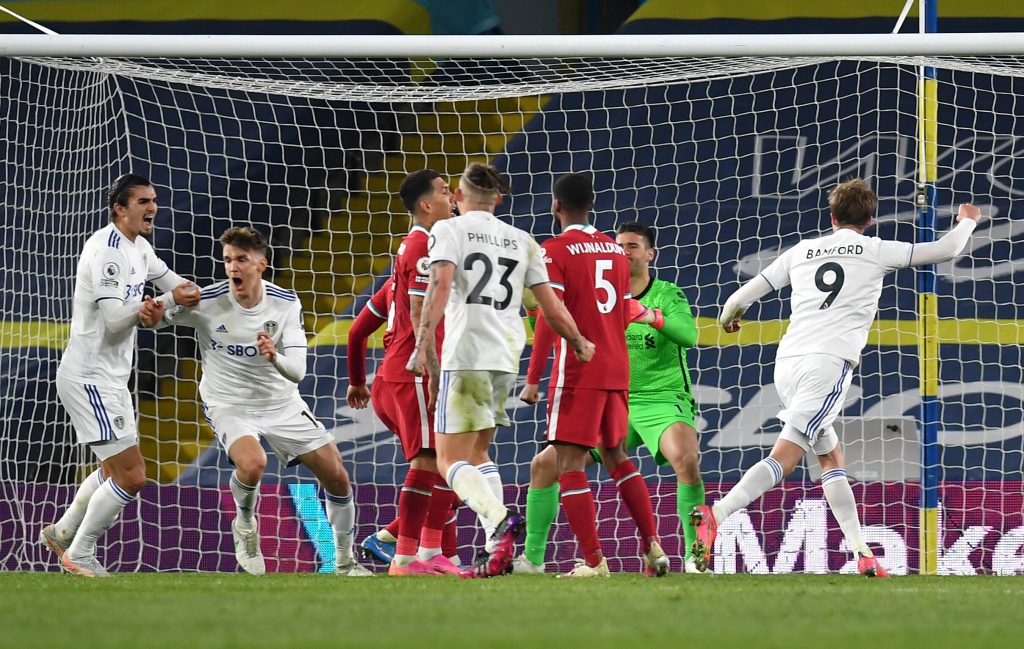 Leeds United drew 1-1 against Liverpool in the Premier League at Elland Road on Monday night.

However, more than the game, it’s the potential threat of a change in the football landscape that has dominated the headlines in the past 48 hours.

The Premier League ‘Big Six’ announced their plans to join the European Super League, and it has caused massive unrest among football lovers.

The proposals would mean that six clubs – Liverpool, Manchester United, Manchester City, Chelsea, Arsenal and Tottenham Hotspur – would play midweek games against the likes of Barcelona and Real Madrid in a league where they cannot be relegated.

Leeds United have made their stance absolutely clear.

According to reports from The Guardian, Leeds laid out T-shirts for their rivals, telling them that ‘Champions League qualification had to be earned on the pitch rather than in negotiations for a closed-shop competition’.

Leeds took the field for their warm-up wearing the shirts, which had the slogan: ‘Champions League: Earn it’ on the front.

Another slogan read: ‘Football is for the fans’. The Whites aimed a dig at Liverpool with this full-time tweet:

Outside Elland Road, fans gathered to protest against the proposal.

Members of the Leeds Supporters’ Trust displayed a banner which read:

‘One of the reasons football is the most popular sport in the world is because the weak can beat the powerful’.

Before kick-off, a plane carrying a banner with #SayNoToEuropeanSuperLeague was flown over the stadium.

Former great England goalkeeper David Seaman was moved by Leed’s stance towards ESL, and he tweeted:

Read: Leeds keen on an Argentine defender this summer.