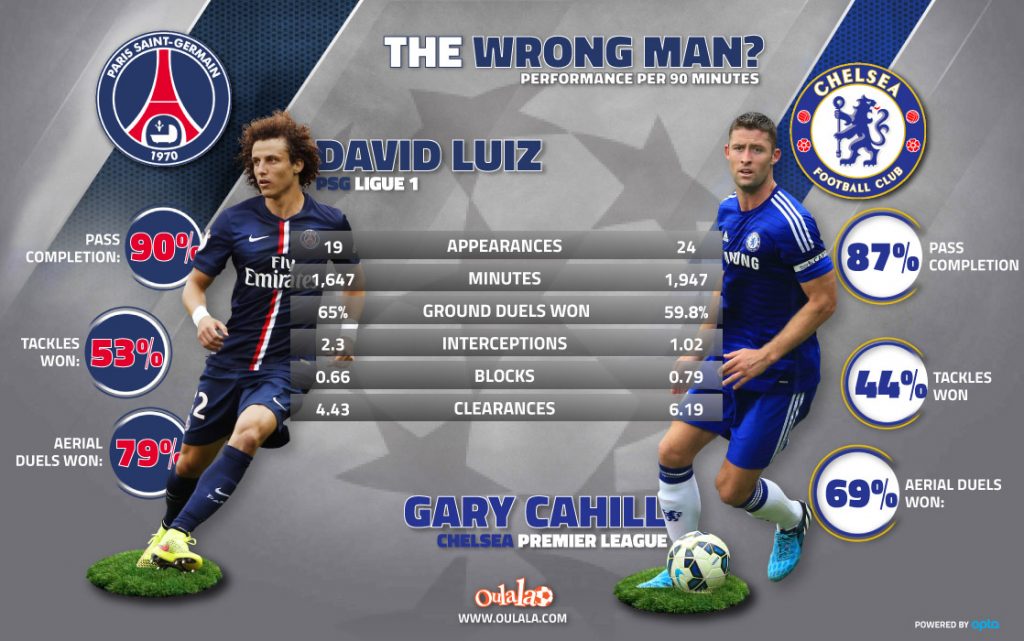 On Tuesday night David Luiz will face his old club Chelsea for the first time since leaving London to join Paris Saint-Germain for £50 million last summer.

It appeared Luiz was surplus to requirements at Stamford Bridge when Jose Mourinho chose to cash in, opting for his preferred John Terry and Gary Cahill partnership.

On the dawn of the last 16 clash between PSG and Chelsea, Opta powered fantasy football game Oulala decided it was time they checked out how Luiz was performing in Ligue 1 since his switch and how his stats matched up to ex-teammate Gary Cahill, thus revealing whether Jose Mourinho did the right thing when he offloaded the Brazilian.

With Cahill playing 5 more games and racking up 300 more minutes than Luiz this season, the comparison has been made via a per 90 minute basis with the 7 main defensive criteria being analysed.

The first stat Oulala looked at was tackles won with Luiz leading the way comfortably with a swing of almost 10% in his favour, 52.7% to Cahill’s 43.9%. For head-to-head battles again Luiz edges it. Luiz excels aerially with a success rate of 78.6% compared to 69.1% from Cahill. On the ground the PSG centre-back leads further with 65% of his duels won, while Cahill has only racked up a rate of 59.8%.

Luiz also leads for interceptions with 2.3 per 90 minutes compared to 1.02 from his opposite number. However, Cahill does peg the Brazilian back for blocks and clearances. The Chelsea defender edges blocks narrowly, 0.79 to 0.66 per 90 minutes with 6.19 clearances to Luiz’s 4.43.

The passing stats for both players are impressive, however it is Luiz that leads again with an impressive 90% completion of all passes made, Cahill falls just short with 87%.

So with David Luiz leading Gary Cahill for 5 of the 7 main defensive criteria this season is it possible that Jose Mourinho was wrong when he sold the Brazilian to Paris? Did he in-fact sell the wrong man?