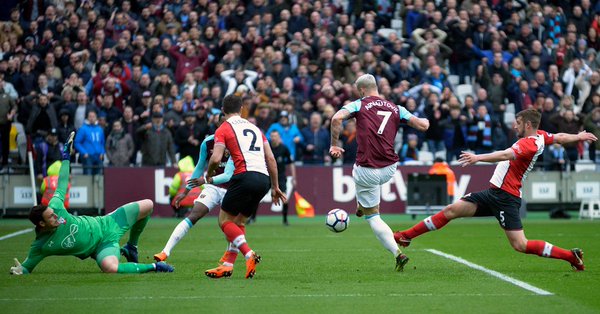 The 28-year-old joined the Hammers last summer from Stoke City for a club record fee up to £25 million, as reported by the Guardian, and is key for West Ham’s survival hopes.

Arnautovic struggled under Slaven Bilic, but his form has dramatically improved since David Moyes took charge at the club.

He has scored seven goals in his last ten games, and Higginbotham says he is West Ham’s go-to man. He adds that Arnautovic is a strong player who brings others into play and is a good finisher.

Indeed, Arnautovic has played a massive role in the second half of the season, and he will have to play a huge role if West Ham are to survive in the Premier League.

Arnautovic scored twice against Southampton on Saturday as the Hammers won 3-0 at the London Stadium. It was a crucial win that came after three straight defeats.

“Marko Anautovic loves being the main man. He thrives on it,” wrote Higginbotham for The Sun. “He was Stoke’s best player and now he is West Ham’s go-to man. And he has seven goals in 10 games.

“It was a high pressure game at the weekend and he loved it – scoring twice. He is strong, direct, presses the opposition well, brings others into play and is a good finisher.”