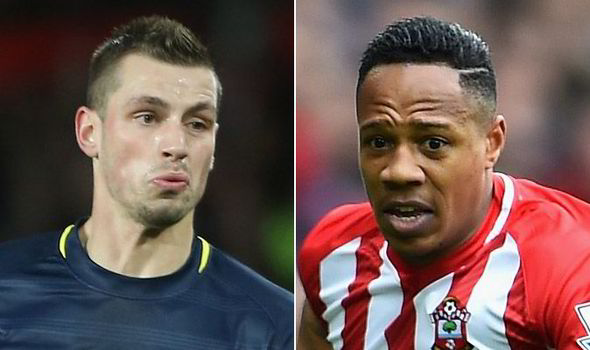 Despite the remainder of this season still to be played out and silverware yet to be claimed, the British press are already in transfer rumour overdrive.

Although most websites can be ignored, having a reputable source such as The Guardian state that Chelsea are interested in Southampton pair Morgan Schneiderlin and Nathaniel Clyne deserves at least some consideration.

The Saints pair will be in demand this summer but should consider their futures very carefully; moving to Stamford Bridge could be career suicide.

Meanwhile, Zlatan Ibrahimovic netted a hat-trick last night to see Paris Saint-Germain through to the Coupe de France final, proving again that he is one of the world’s best strikers.

Southampton pair must avoid the Blues

Southampton’s season has been one of the feel-good stories of the campaign, with the south coast side overcoming a summer exodus to mix it with the division’s top teams under new manager Ronald Koeman.

Two of the stars for the St Mary’s Stadium outfit have been Morgan Schneiderlin and Nathaniel Clyne, who are repeatedly being linked with summer exits as a result.

The French midfielder is said to be admired by North London rivals Arsenal and Tottenham, while the full-back is supposedly in Manchester United’s sights.

However, a heavyweight suitor has entered the fray if The Guardian is to believed, with Chelsea said to be keeping tabs on them both.

Although the allure of a move to the likely English champions will be significant, the Southampton duo would be advised to think twice before jumping ship to move to West London.

While both are good enough to play for Chelsea’s first-team, their respective opportunities to do so would most likely be limited.

Clyne is one of the most exciting attacking full-backs in the Premier League, but Blues stalwart Branislav Ivanovic would take some removing from the starting XI.

As such, the young English defender would likely have to bide his time and accept fringe status, which would inhibit his current momentum and limit his international hopes.

Schneiderlin meanwhile would have arguably the division’s most complete central midfield partnership to break up in the form of Nemanja Matic and Cesc Fabregas if he was to gain regular action.

As influential and able as the France international is, the likelihood would be that Schneiderlin would be on the bench more often than on the pitch.

The pair will be considering their respective futures given the teams that are reportedly interested in them, and one or both may decide that they want to leave St Mary’s this summer.

However, before weighing up a potential switch to Chelsea they would be advised to talk to current team-mate Ryan Bertrand and face the reality that signing for the Blues would mean prolonged periods on the sidelines.

The wonder of Zlatan

Any notions that age is catching up with Zlatan Ibrahimovic were again put to bed as the 33-year-old striker netted a hat-trick in PSG’s 4-1 win over Saint-Etienne last night.

The Swedish forward continues to be the main man for the big-spending French side despite the presence of other international attackers and maintains his place as one of the world’s best in his position.

The tenacity and quick-thinking of the veteran’s second strike, where he played the ball around the onrushing goalkeeper to slot home, was a classic insight into the confidence and sheer ability of the man.

Having won a total of 11 league titles throughout his career, there is no doubting that his presence breeds success, with another remarkable record within his grasps.

Last night’s strikes take Ibrahimovic past the 100-goal tally for the French capital city side and he is now seemingly destined to be the club’s all-time top goalscorer; he only needs eight more goals to usurp Pauleta’s record.

With the motivated Scandinavian back fit and firing, PSG will take some stopping in their quest for a domestic double.

Meanwhile, the powers that be at Barcelona will surely not relish facing their former star in the Champions League quarter-finals.