The Reds blew a 3-0 lead to draw 3-3 here late last season and their form to start 2014-15 has been anything but top four contention – 14 points from 11 games and in 11th position heading into this weekend’s fixtures.

After some initial decent results under Neil Warnock, Crystal Palace have taken just one point from their last five and are outside the relegation zone on goal difference.

Crystal Palace have been fortunate with injuries so far this season – James McArthur is their only known doubt heading into the weekend.

Daniel Sturridge is set to face another month on the sideline, this time with a thigh injury picked up in training, if reports are correct. The England international has not played for Liverpool since August and the third game of the season.

Defenders Mamadou Sakho, José Enrique and Jon Flanagan look set to miss out again but otherwise Brendan Rodgers should have all the players he’s been using of late, available to him. 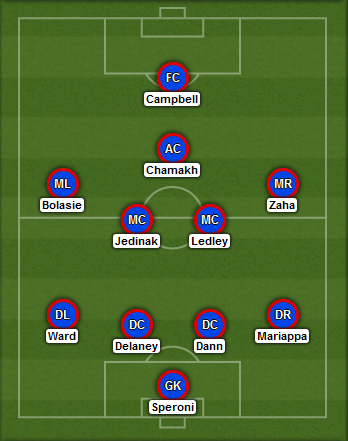 Neil Warnock doesn’t have too many alternatives to this formation. He likes to play one up front with Marouane Chamakh both supporting Fraizer Campbell and dropping deep when Crystal Palace are out of possession. He also plays two quick wingers for the counter-attack, with Jason Puncheon an alternate option to either Wilfried Zaha or Yannick Bolasie.  Dwight Gayle had good success versus Liverpool last season so could start up front. 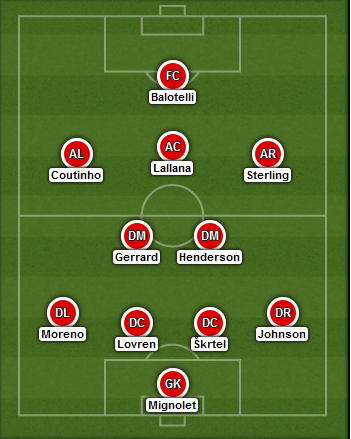 Mario Balotelli continues to get the nod ahead of Rickie Lambert and Fabio Borini. None of them have scored a single Premier League goal between them this season and we’re in late November now. Perhaps the Italian could do with taking a penalty. There are plenty of playmakers behind the striker. Jordan Henderson has been poor for England for a while but plays well for a mid-table Liverpool side. The defence remains very shaky.

Philippe Coutinho vs Adrian Mariappa
In recent weeks, Liverpool’s Brazilian playmaker has shown glimpses of what he’s capable of and what he delivered when he first arrived at Anfield. Philippe Coutinho has a favourable matchup against Adrian Mariappa whom we’re not a big fan of. Crystal Palace have shipped 10 goals in their last five games which doesn’t bode well for the home side this weekend.

Raheem Sterling vs Joel Ward
Liverpool’s young forward has not been at the top of his game for a while but Raheem Sterling will be fancied by many to get himself on the scoresheet this weekend against one of the league’s weakest defences Joel Ward is a pretty solid left-back but will be tested by the pace of Sterling who enjoys running at defences, both inside and outside.

Jordan Henderson vs Joe Ledley
If Mile Jedinak is tasked with keeping Adam Lallana or Steven Gerrard quiet, expect Jordan Henderson to play a big role in the centre of Liverpool’s midfield. The England international creates more chances than most of his teammates and should find some free space to do so at Selhurst Park this weekend whilst the bigger stars face close attention.

Prediction: Crystal Palace 1-3 Liverpool
Liverpool go to Bulgaria midweek for an important UEFA Champions League game so we think Brendan Rodgers’ side will come out all guns blazing from the start in this game to run out to an early lead. Sure, they haven’t been firing on all cylinders since Daniel Sturridge picked up his first injury but they’re a good matchup against a Crystal Palace side who have picked up just one poinr from a possible 15 of late.