Championship side Crystal Palace FC will face liquidation this afternoon if the business group attempting to buy the club cannot reach an agreement by 15:00 BST.

CPFC 2010 (a consortium of local London businessmen headed by Palace supporters) have agreed terms on a deal to purchase the club outright – but will not compete the transaction until they reach a compromise with the Bank of Scotland, who are brokering the sale of the club’s ground, Selhurst Park.

CPFC 2010 have revealed, via a statement on the official Palace website, that they have reached an impasse with BoS over a deal for the stadium – stating that the bank’s current proposition is ‘unworkable’.

The 15:00 BST deadline has been put in place by the club’s administrator Brendan Guilfoyle, who was put in charge of financial affairs at Palace in January.

Guilfoyle has admitted that, if a deal to buy the club is not forthcoming, then he will have no choice but to allow the insolvency procedures (starting with player sales) to begin – meaning that Crystal Palace could cease to exist by this time tomorrow;

“I’ve already made the calls [to other clubs]. What I’ll actually do after the deadline is start selling players. The enquiries are out, offers have been received.

“There are a number of players who have value but once they’re sold and if no-one else comes in then I’ll have to resign, walk away and then the liquidation process will re-start.

I am now genuinely concerned because I can’t let the thing drift on into June.

The staff at Palace have not been paid since the end of April. I can deal with that by selling the club’s star players but what CPFC 2010 have said is if you start selling players we’ll no longer be interested.

If I start selling players – and I will because I have to – I’m not confident CPFC 2010 will still be around. In those circumstances I haven’t got anyone to buy the club because they have, for a long time, been the only show in town.” 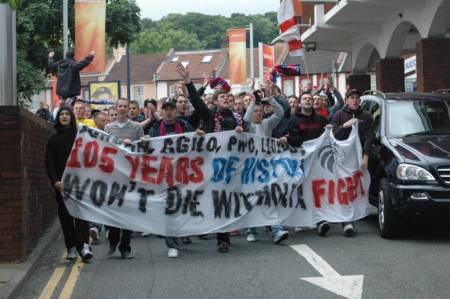 Crystal Palace supporters have been gathering en masse outside both Selhurst Park and the Lloyd’s Banking Group building in the centre of London (BoS is part of the Lloyd’s group) today to protest the club’s current plight but, with only three hours left for a deal to be finalised, all their chanting, boycotting and marching may sadly be in vain.

UPDATE: According to a spokesman for Lloyd’s Banking Group, an agreement has been reached ‘in principle’ to sell Selhurst Park to the CPFC 2010 consortium.

“PricewaterhouseCoopers has reached an agreement in principle with CPFC 2010 in relation to the sale of Selhurst Park. This enables the consortium to go ahead with the purchase of both the Crystal Palace Football Club and Selhurst Park.

Lloyds Banking Group has worked hard throughout this process to achieve a durable solution. We are pleased a successful conclusion has now been reached.

We are also pleased that PwC, which acts on behalf of Selhurst Park, has publicly acknowledged today the ongoing support it has received from Lloyds Banking Group.”