Real Madrid forward, Cristiano Ronaldo, has been crowned the winner of the 2016 Ballon d’Or.

The Portuguese beat Barcelona’s Lionel Messi and Atlético Madrid‘s Antoine Griezmann to win the prestigious award for a fourth time. “I never thought in my mind that I would win the Golden Ball four times. I am pleased. I feel so proud and happy,” said Ronaldo to BBC. 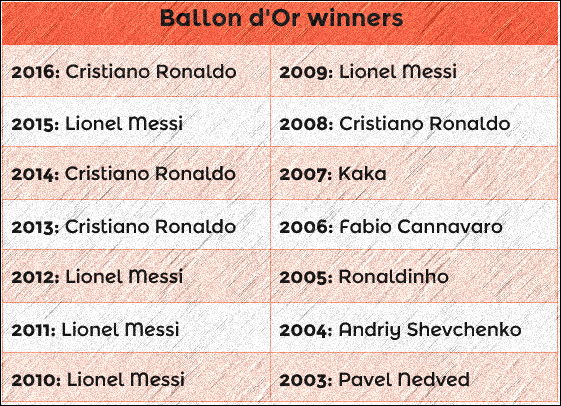 This year the award has been handed over by France Football, after Fifa ended its association with the award in September. Fifa will present its own prize for the world’s best men’s player, best women’s player, and team of the year, at the Best Fifa Football Awards ceremony in Zurich on 9 January.

In 55 appearances for club and country, the 31-year-old has scored 51 goals and further assisted 17 last season. He was directly involved in 39 La Liga goals in 30 games — 31 scored and 9 assisted. The former Manchester United forward has scored 19 goals in 20 games for Real Madrid this term.

Ronaldo netted the winning penalty in the Uefa Champions League final against Atlético, and also played a key role in getting his team up to the stage. He scored in both legs against Roma in the round of 16 and scored a hat-trick in the second leg against Wolfsburg in the quarter-final.

The Portuguese carried forward his impressive form for his nation at Uefa Euro 2016, where he grabbed a brace in their final group game to see his side through to the knockout stages. He also scored against Wales in the semi-finals.

An excellent year for Lionel Messi

Lionel Messi, the Argentine forward, had also been in superb form, helping Barcelona win La Liga, the Copa del Rey, and the Supercopa de Espana last season. He scored 58 goals and racked up 32 assists in 61 appearances for club and country, including five in the 2016 Copa America Centenario.

However, Messi suffered heartbreak with his national team, as La Albiceleste lost the Copa America in a penalty shootout with Chile.

As many as eight Premier League players had made it on to the 30-player shortlist, of which five made it into the top 17. Vardy’s club teammate, Riyad Mahrez, who won the PFA Player of the Year last season, finished seventh in the vote.