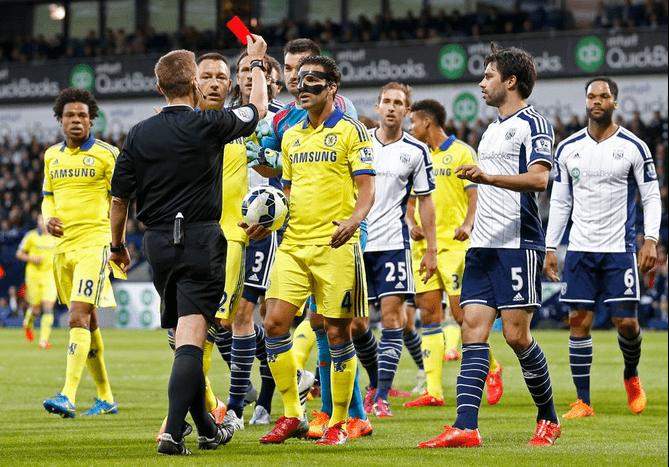 Chelsea put in one of their most indifferent performances of the season as they capitulated to a 3-0 defeat at the Hawthorns against West Bromwich Albion.

This game will be remembered though, for Cesc Fabregas’ bizarre sending off midway through the first half. After Diego Costa caused a scuffle in the box, referee Mike Jones was trying to sort things out. As a crowd assembled, the Spanish midfielder inexplicably kicked the ball right into the party and hit Chris Brunt right on the head. He was duly sent off.

Cesc Fàbregas gets a red card for this pic.twitter.com/wNcCyDpb0K

With the title already sealed, the viewers, including Chelsea fans, saw the light side of this incident. Twitter was soon abuzz with people talking about Fabregas, as he became the top trend in the United Kingdom.

WHAT A SHOT FROM FABREGAS THOUGH!

Having accidentally booked a holiday for May 20, not June 20, Cesc Fabregas decides to act. — Sam Tighe (@stighefootball) May 18, 2015

Chelsea were hardly in the game, and the fans hardly seemed to care, both in the stadium and on social media. The away fans continued to sing their hearts out, while the Blues online couldn’t help take a few digs at their opponents either.

Wouldn’t of thought that we are 3-0 down? pic.twitter.com/LEPrzdAf9a

Even the Sky Sports pundits couldn’t help but have a laugh:

Fabregas will now miss the last game of the season against Sunderland, along with the Community Shield and the opening game of the 2015/16 campaign.