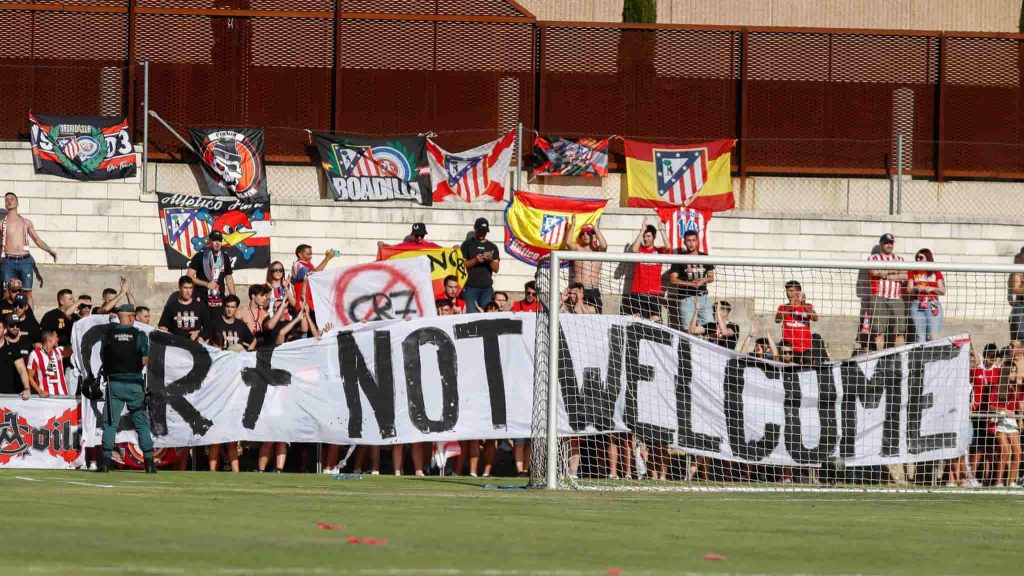 Atletico Madrid fans have made their feelings abundantly clear following rumours that their club had been linked with Manchester United‘s want-away forward Cristiano Ronaldo.

The legendary marksman once again reiterated his desire to leave Old Trafford on Tuesday having returned to Manchester for the first time since the end of last season.

New manager Erik Ten Hag, along with the club’s hierarchy, are eager to persuade the 37-year-old to stay but it seems his ambitions lie with a move to a team actively competing for trophies.

A whole host of Europe’s elite clubs have been heavily linked with a move for the game’s greatest goalscorer, although suggestions that Chelsea, Bayern Munich and PSG were interested have been quickly dismissed by each club.

More recently however, there have been rumblings of a somewhat left-field return to the Spanish capital, but not with a romantic reunion with former club Real Madrid.

Instead, Atletico Madrid are the latest side have been linked with Ronaldo, although President Enrique Cerezo quickly rubbished rumours, saying; “I don’t know who invented this story about Cristiano Ronaldo to Atletico Madrid – it’s definitely not true”.

It also seems a select group of Atleti fans are firmly against a move for their former rival after a banner was unveiled in their friendly against Numancia – it read “CR7 NOT WELCOME”.

Union Internacional de Penas Atletico de Madrid, the club’s international fan union, have also claimed that Ronaldo ‘represents the antithesis of the values that are the hallmarks of our Atleti, such as effort, generosity, simplicity and humility’.

Ronaldo famously cherished playing against his former neighbours during his time in Spain, scoring 25 goals in 35 career games, registering four hat tricks and, of course, two wins in Champions League finals while playing for Real.

As it happens, United are next in action against Atletico in Norway as their pre-season draws to a close – take a look at our guide to the best football betting sites ahead of Saturday’s kick-off.