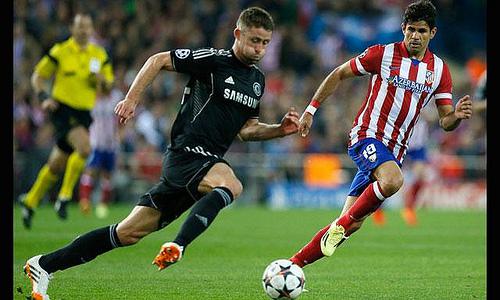 Chelsea have again been one of the big spenders in the Premier League over the summer transfer window so far and Diego Costa could be the man to bring silverware to Stamford Bridge.

Manager Jose Mourinho insisted last season that his side were not ready to claim the English crown or go all the way in the Champions League but the Londoners came awfully close.

Pushing for the Premier League title until the last couple of weeks, with a team that ‘wasn’t ready’ is an ominous sign for Chelsea’s rivals in the campaign to come, considering the signings the club have already made this summer.

Barcelona playmaker Cesc Fabregas was the first big name through the door at The Bridge, while Atletico Madrid defender Filipe Luis has also made the switch from Spain to London.

However it’s Luis’ former Atleti team-mate Costa who really stands out as a major piece of the puzzle that Chelsea were missing last season.

Not since the departure of Didier Drogba have the Blues had a striker who is guaranteed goals and on the biggest of occasions.

Despite having big names like Fernando Torres and Samuel Eto’o, nobody has really been able to fill the shoes left by the Ivorian and score consistently in the English top flight.

However the tenacious and prolific talent that is Costa could be the answer to Chelsea fans’ prayers.

With 35 goals in all competitions last season for Atleti, the talented 25-year-old was a key figure in helping the club beat off the challenges of European powerhouses Real Madrid and Barcelona to win the La Liga title and reach the final of the Champions League.

With the creativity of the likes of Fabregas, Eden Hazard and Oscar in behind, many will be backing Costa in the sports betting to get plenty of goals next season and help Chelsea scoop some of the biggest prizes going.

Gamblingland.com lists betting bookmakers such as bet365, winner.com and bookmaker.com who have odds on the Blues to claim the English crown and even win the second Champions League title in their history.

If you are wanting find the best odds on Costa and Chelsea and are not sure who to go with websites, such as the one above, which will help you find the best deal.

Whilst looking at Chelsea’s odds you can also play the latest Gambling Land slots here with loads of games to choose from.

Mourinho himself clearly has big prizes in mind when it comes to next season and Costa will be key to those plans.

Of course keeping the Spain international fit will be essential as he endured a torrid time with injuries at the end of last season and never really looked like himself at a disappointing World Cup for the then reigning champions La Roja.

Chelsea will be hoping that the weeks of rest after the tournament in Brazil will have done Costa some good and his hamstring issues are well behind him.

With Mourinho still expected to bring in more quality to the squad of the coming weeks, it is a very exciting time for the Blues faithful.

But arguably the most important business has already been done by the Portuguese tactician and with Costa in their ranks, a team that ‘wasn’t ready’ last season, looks like it can go all the way in the Premier League and in European this time around.