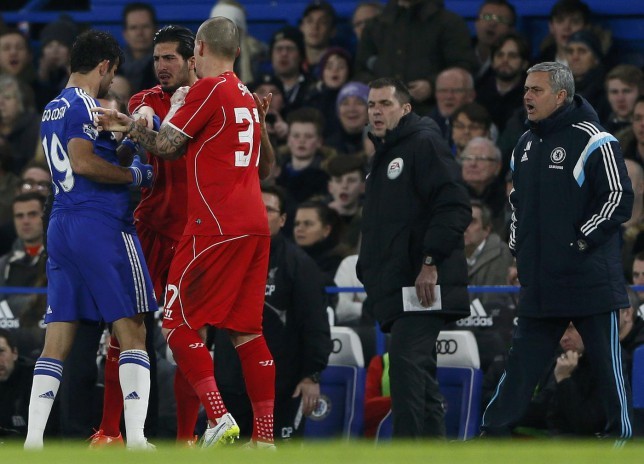 All the talk on this morning’s papers has been with regard to Chelsea’s divisive forward Diego Costa. Rugged, powerful and aggressive, Costa has been praised for his terrier-like qualities which have seen him seamlessly adapt to life in the Premier League. However, after yesterday’s 1-0 defeat of Liverpool, criticism of the 26-year-old has been widespread. Thierry Henry and Jamie Redknapp were unanimous in their post-match analysis, condemning Costa’s actions, Henry claiming that “he went too far”. Costa is no stranger to controversy. Having been dismissed 5 times in his career and carded 72 times, his ‘hotheadedness’ has been called into question more than once over the cause of his career.

The Spain international has 17 goals to his name so far this campaign, leading the Premier League scoring charts and has been one of the top performers of the season so far. Ruthless, relentless and unerringly clinical, Costa has taken to the Premier League with ease and has close to a one in one goal scoring record in the league thus far. There can be little question, clearly, over his ability. His antics however, are a little more ambiguous. Earlier in the season against Sunderland, Costa was criticised for kicking out at John O’Shea and striking Wes Brown with his forearm at a corner. Costa avoided seeing red that day and Jose Mourinho was quick to deny accusations that his leading goalscorer had temperament issues, simultaneously refuting the claims that he deserved to be sent off.

Similarly, Costa has been booked for acts of simulation more than once this season, further tarnishing his image. Once more, Mourinho leapt to his defence. Tuesday night though due to the nature of the occasion, a high-profile cup semi-final, has seen Costa’s actions magnified and discussed on a major scale for the first time since his summer move to Stanford Bridge. With only 11 minutes on the clock, the first incident occurred. Yards away from the dugout, Costa appeared to stamp down on Emre Can. The replays made the stamp look really rather deliberate. Costa seemed to look at Can before thrusting his studs downwards into the ankle of the Liverpool midfielder. If spotted, by any of the game’s officials, one suspects Costa would have faced a very early bath.

Throughout the first half Costa epitomised a Chelsea performance we’ve grown used to under Mourinho on day’s in which they lack the coherence, speed and flair displayed when the team is at their best. Costa eventually saw yellow for a tussle with Steven Gerrard as his temper showed little signs of easing. There were further accusations of a second stamp, this time on Martin Skrtel. However, the incident appeared contentious at best, Costa’s movement appearing much more natural on this occasion and any action taken this time round would have seemed very harsh.

It would seem that there is a distinct similarity between Chelsea’s Costa and Liverpool’s former superstar Luis Suarez. Both players adored by their clubs yet disliked by pretty much everyone else. Both players play the game constantly on the edge and as natural-born winners, who will take any measure to ensure that their side is victorious. One should not make allowances for blatant cheating though; simulation, stamping and the like should all be punished. Yet whilst I would not defend all of Costa’s actions, one suspects Liverpool would have few complaints should Mario Balotelli find some of the grit, determination and pure bullishness of a Costa or Suarez.