Ever since Diego Costa hasn’t been recalled to the Spain national team due to injury concerns, we have been hearing all sorts of reports on him. Mainly coming from the Spanish media. Here we have the latest report on Diego Costa injury saga.

Costa got himself injured during previous international trip with Spain, which angered Chelsea manager Jose Mourinho, as the Spain striker who is also Chelsea’s top scorer this season missed few crucial games for the Blues.

The 26-year-old started against Liverpool at Anfield and scored the winning goal for Chelsea, but he wasn’t still picked up by Del Bosque for Spain’s upcoming international matches against Germany and Belarus, mainly on precautionary grounds. 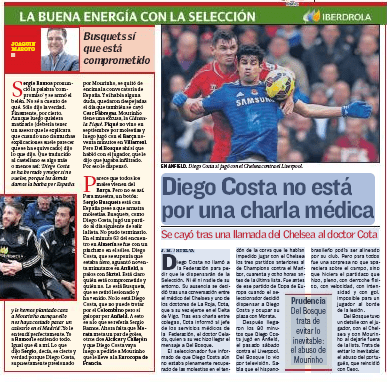 Real Madrid defender Sergio Ramos openly criticised Costa’s commitment to the national team, although he later insisted that his words were wrongly interpreted.

Del Bosque in his pre-match press conference has moved out to defend his players explaining why Diego Costa and Cesc Fabregas were absent from the Spain national team.

“Diego Costa’s case is special.  A groin injury can be crippling sometimes.  He has slowed down his pace in training at his club and we decided not to call him up,” he said.

Spanish newspaper AS has published an article today that claim neither Costa nor Mourinho reported to the Spain boss that the striker will not join the team, rather, the decision was taken after a phone call between Chelsea medical team & Spain camp.

AS however seems puzzled how can Costa be ‘injured’ after his fantastic display against Liverpool, where he didn’t look like the player who is ‘on the edge of being injured’.