I recently wrote an article regarding the loan system and how it was an important factor in helping less financially capable clubs break the stranglehold that the richer clubs have on the Champions League qualifying spots. Then a few days later, out of nowhere, a name pinged into my brain that made me step back and realise that the loan system is as damaging as it is fruitful.

Gael Kakuta. No? Cast your minds back several years and you may remember him as the young Frenchman that Chelsea got into a considerable amount of trouble over signing. Kakuta was found to be in direct violation of his contractual agreement with previous club Lens and was subsequently banned from playing for three months and fined a sizeable sum of money. Chelsea, on the other hand, were fined and placed within the confines of a transfer ban that was successfully repealed several months later.

Its almost five years since the transfer embargo and what does Kakuta and Chelsea Football Club have to show for it? Six Premier League first team appearances and five largely unsuccessful loans stints with the likes of Bolton, Vitesse and French outfit Dijon. Doesn’t really cut the mustard does it?

This is not to say that Chelsea should accept all the blame for Kakuta’s inability to convert immense potential into unquestionable brilliance. The player must also have the right attitude, something which reports have suggested over the years has been duly lacking from the Frenchman.

Kakuta, though, is not the only player to have either been brought in at an early age or progressed through the ranks at academy level only to then be shipped out on-loan season after season. Josh McEachran, Sam Hutchinson, Ryan Bertrand and Patrick Van Aanholt have all experienced what it is like to have a brief taste of first team action at Chelsea before being cast off to various parts of the country or to Chelsea’s feeder club, Vitesse.

This sort of treatment is simply not conducive to productive growth as a footballer. If the premise behind the loaning of a young player to another club is gaining experience in preparation for first team football, then where is the incentive to maintain a high performance level if that very same player is just going to be sent out on loan at every given opportunity.

What’s more worrying is the number of home grown players that are suffering because of this obscure loan policy. There was a time not so long ago that Ryan Bertrand was being tipped to become Ashley Cole’s long term replacement for club and country. Now neither seem plausible due to the introduction of Cesar Azpilicueta and the seemingly impending arrival of highly rated left-back Alberto Moreno. Similarly, Josh McEachran seems destined to be kept at arms length by his parent club as the Blues continuously load up on superstar midfield talent such as Oscar, Matic, Ramires and Willian.

Its a distorted ideology that seems to promote the development of young players to then shut them out by buying in already proven talent. This warped system has Roman Abramovich’s fingerprints all over it. The Russian business tycoon’s undeniable obsession with winning the Champions League leaves no possible room for gradual youth development, as more experienced proven players are brought in on a conveyor belt. This has been the way at Chelsea for a decade now and there has been little to indicate that a change is on the horizon.

It would be unfair to just pinpoint Chelsea as the main offender of poor youth management. Manchester City bought in starlets Scott Sinclair and John Guidetti only to then send them on their way again. Manchester United have done the exact same with Federico Macheda who has been loaned out to six different clubs, and Bebe who is now on his fourth different loan spell. Amazingly, Tottenham’s Andros Townsend has previously been loaned out to nine different clubs. Fortunately for him though he seems to have withstood the test of time and is finally breaking through in to the Tottenham and England set-ups. 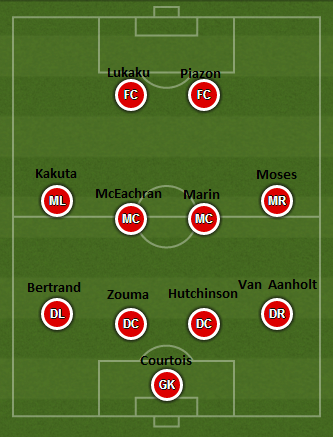 It is at Chelsea, though, where the issue is much more absurd. So absurd in fact that an entire starting XI can be made out of players that are out on loan. These are the supposed names of Chelsea’s future, and yet it is highly likely that Courtois, Zouma and Lukaku will be the only ones that actually ever stand a chance at forcing their way into Jose Mourinho’s plans.

Also, I should add that it would be completely ignorant of me to assume that every young player will always make it big and have a successful career. For some players it just isn’t meant to be, whether it is mentality, injuries or just overstated talent. But for a club like Chelsea, with all the financial power, coaching resources and experience that they have, should surely be able to work more closely with their younger players and ensure that their are less instances of footballing careers flat lining. It is becoming far too much of a regular occurrence.

The case of Gael Kakuta is really just one incident of many in the recent history of Chelsea FC and their mismanagement of the young and talented footballers that they have either been hoovering up from smaller clubs or have been bringing through from academy level. During his loan spell at Vitesse he was quoted as saying, “I don’t dream about Chelsea any more – I used to, now I know better”. If Chelsea do not address the current state of their youth policy then Kakuta’s words will be echoed by every academy player that once harboured ambitions of becoming a Chelsea legend. The cult of the one man club will be a long lost memory.