Paul Pogba has taken to social media to let his feelings be known after playing a starring role in Juventus’ 2-1 away win over Manchester City last night.

Pogba posted a photo on Facebook earlier today, the caption of which read: “Qatar City 1 – 2 Juventus. Great win. Thank you for your support.” 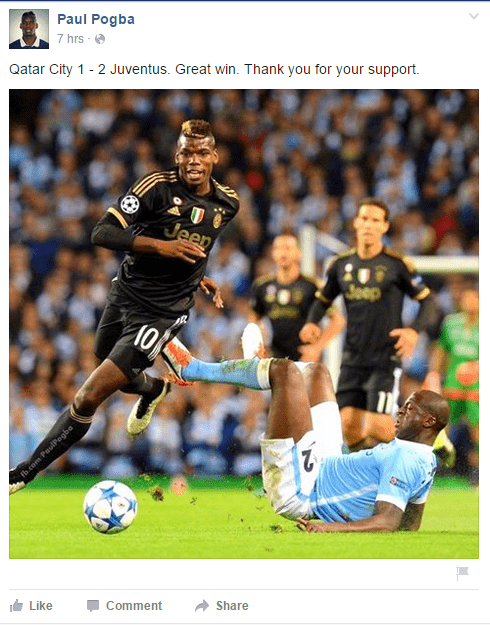 Although he meant it as a chance to thank the Bianconeri fans for their support, the troll content added by mentioning Manchester City as “Qatar City” is bound to upset a huge section of the City faithful as well as the club.

Pogba provided a stunning diagonal ball assist to Mario Mandzukic in the second half to set the wheels of Juve’s comeback rolling after they fell behind via a controversial Giorgio Chiellini own goal. The first goal was followed up with another by Alvaro Morata to complete the comeback for last season’s finalists.

The Chelsea target, who arrived in Manchester under a huge cloud of speculation over his future, turned on a display to show the world why he is regarded as one of the hottest properties in world football.

With his dazzling display last night, Pogba surely has turned heads for any potential suitor, Chelsea included, and might just have driven his worth up an extra €20m with his virtuoso performance against the Sky Blues.