Chelsea winger Eden Hazard is eyeing a move to Real Madrid after a fallout with manager Jose Mourinho.

The Belgian has been disappointing since the start of the season and according to Spanish publication Fichajes, his relationship with Jose Mourinho has suffered.

Real Madrid are keen to bring him to Spain in the summer and Hazard is keen to get away from Mourinho.

Earlier this month the Belgian was seen snubbing a handshake from Mourinho after he was taken off against Porto. 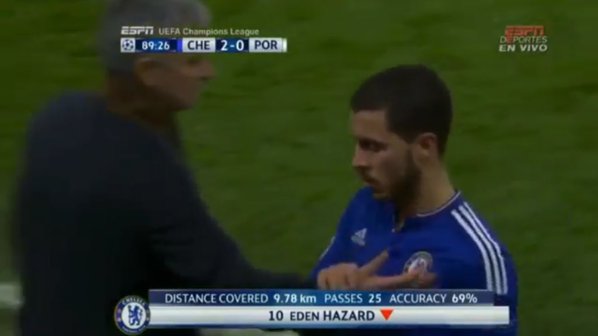 It is understood that Belgian will push for a move in the summer and the Blues value him at around 75 million pounds.

However, Jose Mourinho is not keen on receiving cash for his best player and has a brilliant plan to replace Eden Hazard, if the Belgian decides to leave in the summer.

The Colombian is thought to be frustrated with life under Rafa Benitez and Mourinho is keen to offer him a way out.

It will be interesting to see if a swap deal involving Hazard and Rodriguez materializes in the future. But if it does, it could be one of the most sensational transfers in recent history.