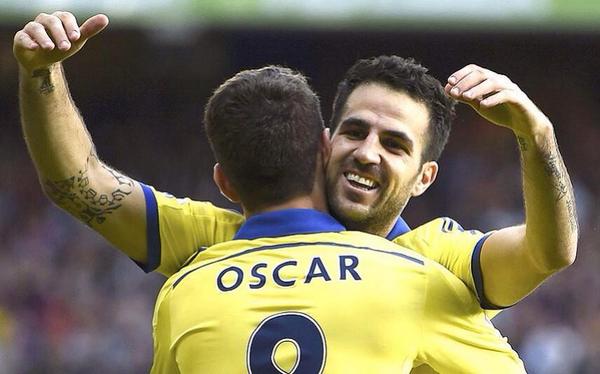 It was a very unlike-José Mourinho thing to do after his side had failed to kill the game off. The potential return of Diego Costa this weekend and facing a side in the relegation zone offers a very realistic chance of returning to winning ways.

Queens Park Rangers recorded only their second victory of the season on Monday night as they were 2-0 winners over a very poor Aston Villa side. Harry Redknapp, not known for his tactical skills now faces a tough task in keeping the score respectable this weekend.

José Mourinho has confirmed that Diego Costa and Ramires are fit to return to face Queens Park Rangers this weekend. This leaves the Portuguese manager without only the suspended César Azpilicueta and injured Loïc Rémy for the West London derby.

Rio Ferdinand has been handed a three-match ban by the FA for something he said on Twitter. Nedum Onuoha remains injured for Harry Redknapp.

Joey Barton and Jordan Mutch have barely featured since August due to hamstring injuries and won’t be available for the visitors this weekend. Alejandro Faurlín is out for the season. 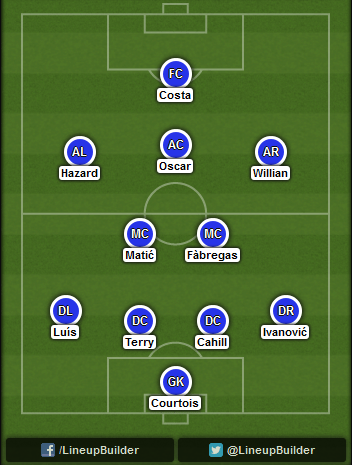 Filipe Luís is a straight swap at left-back for the suspended César Azpilicueta. Diego Costa will replace Didier Drogba up front provided the Spaniard has had no setbacks. This midfield should be able to outclass the Queens Park Rangers midfield that left gaps on Monday night against Aston Villa. 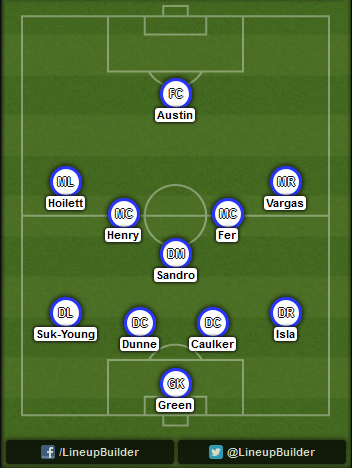 Harry Redknapp played a 4-3-3 last week but you have to think he’ll revert to a more defensive 4-5-1 when they travel to the Premier League leaders. Leroy Fer should move back into the centre of midfield whilst Junior Hoilett offers pace down the left wing on the counter attack. Eduardo Vargas is a useful player on the right wing but can’t be expected to see many opportunities to impress in this game. Richard Dunne may be capable of interceptions and last-ditch challenges but you’d expect Diego Costa to find space in the penalty area against an ageing defender.

Diego Costa vs Steven Caulker
The Queens Park Rangers defence have allowed a league-high 18 goals heading into the weekend. Diego Costa is the league’s joint-top scorer and is expected to be fit again on Saturday. With all the Chelsea playmakers and with the QPR defence looking weak, the Spaniard will surely pick up where he left off by getting his name on the scoresheet… at least once.

Eden Hazard vs Mauricio Isla
Eden Hazard is on fine form and on paper has a winning matchup versus Queens Park Rangers’ right-back, Mauricio Isla. The Chilean international has not yet formed a strong defensive partnership and has been beaten a fair few times when opponents run at him. That’s Hazard’s speciality and the Belgian should be in for a good game on Saturday if he gets this matchup. The Chelsea forward only has two goals and one assist to his name so far this season but this presents itself as a good opportunity to improve on that.

Oscar vs Sandro
Oscar has quietly been one of the top players in the Premier League to start the 2014-15 season. The Brazilian is creating chances and has two goals to his name also. Whilst Cesc Fàbregas and Hazard are rightfully receiving their plaudits, Queens Park Rangers had better be careful of Oscar too. They looked very open at home to Aston Villa in the centre of midfield on Monday and whilst the West Midlands club didn’t have any playmakers to take advantage of it, the West London club certainly do.

Prediction: Chelsea 3-0 Queens Park Rangers
Harry Redknapp doesn’t win too many matches against the best tactical managers and even though Queens Park Rangers won on their last visit to Stamford Bridge, we can’t help but think this is going to be a comfortable home win. One thing Redknapp’s side do have going for them is that Chelsea are in Champions League action midweek so Mourinho may want to rest some players if they get a two-goal lead. Although they face Maribor at home so his side have nothing to fear.