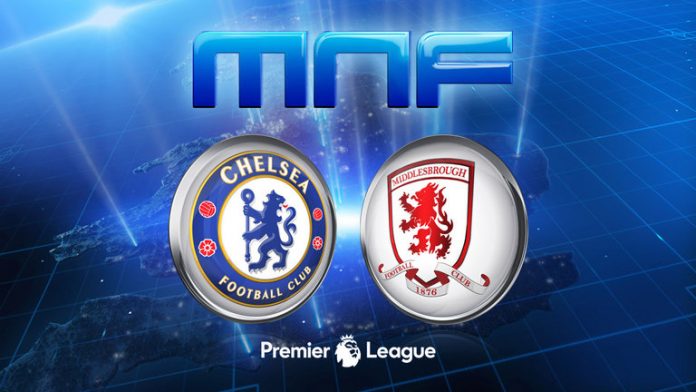 Chelsea host Middlesbrough in the Premier League later tonight and the Blues will be looking to extend their lead to seven points at the top of the table.

Antonio Conte’s men were very impressive against Everton in their last outing and this should be a comfortable contest for them.

The home could be without David Luiz and N’golo Kante for this one. Both players will be assessed closer to kick-off.

Middlesbrough are likely to go down this season. The away side needs to win here in order to keep their survival hopes alive and that is highly unlikely.

Although they are unbeaten in their last two matches, this is a massive challenge for them. Steve Agnew’s men haven’t won away from home since their first trip away from the Riverside Stadium in August.

Daniel Ayala, Victor Valdes and Grant Leadbitter all remain doubts for the away side.

Chelsea have won 23 of their last 28 matches in the Premier League.

Chelsea have kept a clean sheet in their last 8 home matches against Middlesbrough in all competitions.

Chelsea have won their last 7 matches against Middlesbrough in all competitions.

Middlesbrough have failed to win their last 16 away matches in the Premier League.

Chelsea have been winning at both half time and full time in 6 of their last 8 home matches in the Premier League. Bet on the home side to win both halves.

Middlesbrough have failed to score in 6 of their last 7 away matches in the Premier League. Bet on the Blues to keep a clean sheet.

Chelsea have seen under 2.5 goals in 7 of their last 8 home matches against Middlesbrough in all competitions.

This should be a routine win for Antonio Conte’s men. Middlesbrough are in very poor form and despite the draw against City in their last outing, they will struggle to cope with the Blues at Stamford Bridge.

Chelsea will secure the three points comfortably and strengthen their grip at the top of the table.