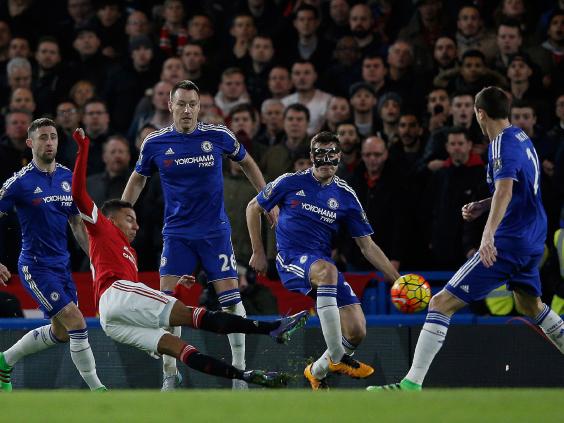 The match was an entertaining one throughout. Both sides had a number of chances in this fixture and Anthony Martial was the first to try and make the most of them, his swirling effort was tipped over the bar by an outstanding save by Thibaut Courtois.

Chelsea finally burst into life with two chances in as many minutes as Oscar fired over the bar before Willian fired a testing low cross into the box which the Brazilian midfielder was inches away from putting in the back of the net. Chelsea then went down the other end and had a penalty shout, John Terry had a shot blocked by the arm of Daley Blind, but referee Michael Oliver waved away the Chelsea protests.

Onto the second half now and Jesse Lingard opened the scoring with a stunning effort on the turn, Borthwick-Jackson crossed the ball into Lingard who did well to bring it down and get away a shot into the top corner just as he was falling. The hosts were nearly on level terms as Branislav Ivanovic caught the ball perfectly in mid-air but was denied by David De Gea.

Chelsea were throwing everything at Manchester United and their hard work paid off late on as Diego Costa took the ball around De Gea and slotted the ball home to the Chelsea fans delight. Costa had another chance to win the game not long after but was superbly saved by David De Gea as Chelsea extended their unbeaten Premier League run to nine matches.