Both sides are on shaky form of late by their standards – José Mourinho’s side have won only four of their last eight in all competitions, eliminated from the FA Cup by Bradford City and shipping five goals at Tottenham on New Year’s Day. Manchester City are winless in their last three and exited the FA Cup at home to Middlesbrough.

Victory for the Blues would put them eight points clear at the top with 15 games remaining whilst many would feel the title is in their hands even with a draw.

The biggest news on the injury front is that Cesc Fàbregas could miss out after being injured by club captain John Terry early in the second half of Tuesday’s League Cup semi-final win over Liverpool.

Though the playmaker does lead the Premier League in assists, his replacement would be Oscar as José Mourinho often plays two defensive midfielders in the big games.

Branislav Ivanović is a slight doubt after receiving stitches to his bloodied foot after Tuesday’s win after sending his side to the final with a headed winner.

Filipe Luís is a slight doubt too, with a calf injury. Either full-back could simply be replaced by César Azpilicueta though whom is comfortable playing either role on the side of defence.

André Schürrle is set for a medical with VfL Wolfsburg ahead of move back to the German Bundesliga.

Manuel Pellegrini is without the services of Yaya Touré and Wilfried Bony who are both at the African Cup of Nations, and Samir Nasri is expected to be out for another couple of weeks with a calf injury. 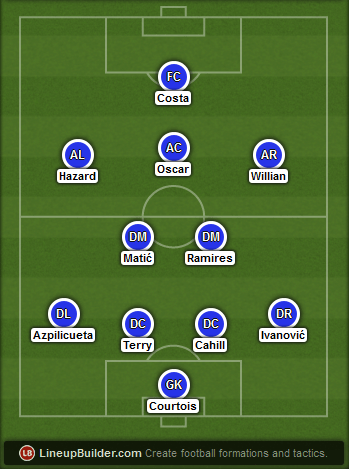 We’re expecting the more experienced Gary Cahill to return to the defence in place of Kurt Zouma. We’ve gone for César Azpilicueta at left-back too. Ramires can partner Nemanja Matić in front of the back four as they look to protect Thibaut Courtois and the defence from the likes of Sergio Agüero and David Silva. The attacking four is Mourinho’s preferred selection for most matches this season. 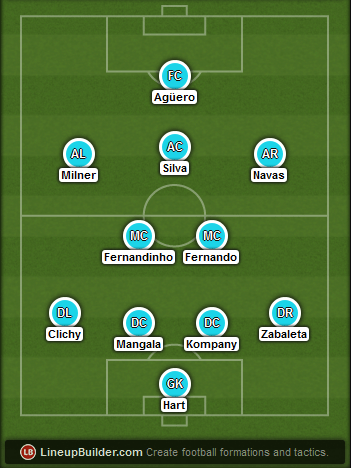 Manchester City have failed to win all four Premier League games Yaya Touré has missed this season and the midfielder is still at the African Cup of Nations with the Ivory Coast. Manuel Pellegrini is also without Samir Nasri so his squad doesn’t look as good as Chelsea going forward.

Eden Hazard vs Pablo Zabaleta
Eden Hazard has arguably been the best player in the Premier League this season and he’s matching up against a full-back in Pablo Zabaleta who has been out of form in the New Year. The Belgian will certainly fancy his chances of dribbling past the Argentine, winning free kicks and causing problems for the City defence in the final third. He likes to drift in field too so don’t be surprised to see Hazard take on or cause problems for Eliaquim Mangala.

Oscar vs Eliaquim Mangala
Chelsea’s Brazilian playmaker does a lot of running and looks to have a pop at goal. Oscar is clever and will look to occupy the space in between the defence and midfield. Once in possession he’ll fancy his chances running at Eliquim Mangala to get a shot in on Joe Hart’s goal. He’s also got Diego Costa in the penalty area to pick out. The expensive City defender hasn’t settled in yet and you be sure José Mourinho has a gameplan to expose him.

David Silva vs Ramires
Sergio Agüero hasn’t found his form in his three games since returning from injury. In this time Manchester City have only scored one goal. They will be encouraged by Chelsea’s recent leakage and one player who can cause a real threat is David Silva. The Spaniard is so clever with the ball and has quick feet and precision to find his teammates. Ramires can be clumsy and does run out of position so don’t be surprised if Silva finds some space in this match, unless he is double-teamed.

Prediciton: Chelsea 1-0 Manchester City
A home win and the title in the bag! Manchester City’s recent run of 1-1, 0-2 and 0-2 doesn’t convince us that they will be able to get a result to keep the Premier League title race realistically alive. They’ve got weaknesses that we can see Chelsea exposing and José Mourinho has a good record versus the big teams in England. His side are also 10 wins from 10 at home in the Premier League this season.