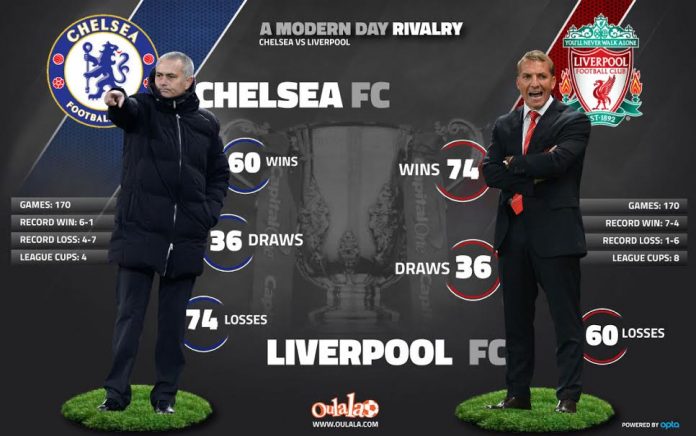 Chelsea against Liverpool has become one of the modern day rivalries and tonight they lock horns yet again at Stamford Bridge for the 171st time in all competitions following last weeks 1-1 draw in the first leg of the Capital One Cup semi-final.

Opta powered fantasy football game www.oulala.com have taken a detailed look at the head-to-head history of the two clubs through the years.

Ever since Luis Garcia’s ‘ghost goal’ in the Champions League semi-final during Liverpool’s victorious European campaign of 2005, it seems a certain aura presents itself whenever the two sides play.

The first meeting between the two clubs takes us all the way back to 1907 in the old League Division One at Anfield. Chelsea had only formed two years prior but still managed to nab a 4-1 away victory.

Since then it has been the Merseyside club that has dominated. Liverpool have won 74 of the 170 matches that the two sides have played, 36 have been draws, while Chelsea have won 60.

Chelsea’s record win came at Stamford Bridge on 28th August, 1937 in a League One game. The West London club came out on top 6-1.

On 7th September, 1946, again in the old League One, Liverpool went one better winning the game 7-4 at Anfield.

In the League Cup the two sides have met a total of six times. Liverpool have won 4, Chelsea have won once and the last was a draw, 1-1 last week. Chelsea’s sole League Cup victory against Liverpool came on 27th February, 2005 – the final – and Mourinho’s first trophy as Chelsea manager. At the time Brendan Rodger’s was the Chelsea youth manager.

Chelsea have won four League Cups with their last win coming in 2007. Liverpool have a total of eight, the most trophies by any single team with the most recent coming in 2012.

With Jose Mourinho and Brendan Rodgers sharing the same birthday, 26th January, only yesterday, they’ll be hoping to continue the birthday celebrations into a second day, but even more importantly they will also be looking to write the name of their team into the history books once again.