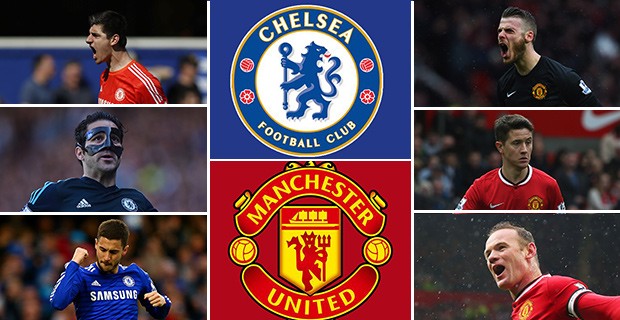 Manchester United travel to Stamford Bridge this evening and Louis Van Gaal will be hoping that side replicate their outstanding performance against Stoke City earlier this week.

It has been a poor season for the Old Trafford outfit but the Red Devils produced their finest performance this season on Tuesday night as the likes of Mata, Rooney and Martial combined to punish the high flying Stoke City.

Chelsea have improved a lot under their new manager Guus Hiddink and Manchester United will need to keep up their form from the last game in order to come away with a positive result. The Blues have a very good record against United and will look to build on it.

Van Gaal has to deal with an injury plagued defence against Chelsea today. The likes of Rojo, Jones, Shaw, Valencia and Young are all ruled out with injuries.

Midfielder Bastian Schweinsteiger is expected to miss out as well.

Chelsea will be delighted to have all of their first team players fit for this game. The only absentees are Falcao and Remy, both of who are still recovering from their respective injuries.

Pato is expected to start on the bench as he continues to build his match fitness in training.

Here are the possible lineups from tonight’s crunch clash at Stamford Bridge.