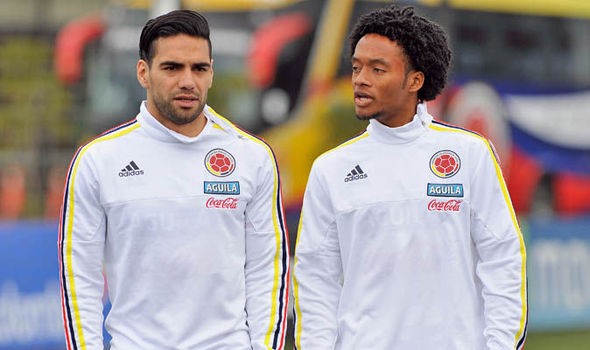 Juan Cuadrado has commented on the news that his international teammate Radamel Falcao is soon to be revealed as his club teammate as well. Chelsea should be announcing the move any time now, which involves Falcao joining from Monaco on a one-year deal for £4 million, with a subsequent option to buy the striker next summer for £35 million.

In the press conference before Colombia’s Copa America clash against Brazil, as quoted here by the Daily Mail, Cuadrado said, “It is important to have a teammate like Falcao at the club.”

Manchester United had a similar option with Falcao last season, even though their option to buy was set at £43.2 million. But, Louis van Gaal let the player go after a disastrous campaign that only saw him score 4 times in the league. Falcao was not too long ago one of the most lethal strikers in Europe, but an anterior cruciate ligament injury last year, which saw him miss the World Cup in Brazil as well, has seen his form drop like a stone. In Falcao’s absence, Cuadrado starred in Colombia’s run to the quarter-finals and earned a big reputation. He was targeted by several top European clubs including Man United, but Fiorentina managed to keep him in the summer. In January though, they found it impossible to resist the interest.

Cuadrado joined Chelsea on deadline day in February for £26.8 million, but has failed to establish himself in the first-team. There are indications that he hasn’t settled in yet to life in London and the Premier League, and the best is yet to come. Having a familiar face in Falcao at the club may help him thrive, and he seemed delighted at the news of the transfer.

The winger remains an important player for his national side despite minimal game time at Stamford Bridge. Colombia manager Jose Pekerman too commented on Falcao’s move, saying that the two countrymen would help each other regain their lost form.