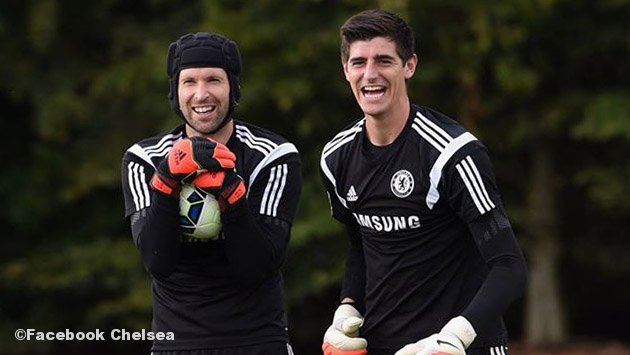 Chelsea goalkeeper Thibaut Courtois has given his teammate Petr Cech some startling advice. The Belgian, in an interview to Sky Sports, has said that the veteran should leave Chelsea in order to get some first-team football. Cech, Chelsea’s regular keeper over the last decade, has lost his number 1 spot this season to Courtois, and there are several rumours linking him with a move away from Stamford Bridge in January.

There are many who believe that the 32 year-old is still a top keeper and is good enough to get into the first XI of most clubs around the world. Courtois too, seemed to reflect that sentiment in his statements. He said, “As a goalkeeper you want to play. If I was in that situation where I didn’t play a lot, then I would leave too.”

“I think Petr is still a goalkeeper with a lot of quality and one of the best there is.”

The likes of Paris Saint-Germain, Monaco and Real Madrid have been rumoured to be interested in securing the services of Cech. The Czech international was brought to Chelsea by Claudio Ranieri way back in 2004 and quickly established himself as the undisputed number 1, displacing Carlo Cudicini. He has won 3 Premier Leagues, 4 FA Cups, 2 League Cups, 1 Europa League and 1 Champions League title with the Blues in his time at the club.

Courtois, who spent three seasons on loan at Atletico Madrid, has now taken over the reins between the sticks. Despite only keeping two clean sheets in the league so far, the 22 year-old has been instrumental in the Blues’ unbeaten start to the season.

The former Genk man though, isn’t too concerned about replicating Arsenal’s Invincibles from the 2003-04 season. He believes that securing the title should be on the top of Chelsea’s agenda.

“Obviously a lot of people hope that we can go unbeaten, we will see. The Premier League is a very hard competition, so I think that’s maybe why just one team did it, but I think it will be hard,” Courtois said.

“It’s more important to be champions, and if it is unbeaten then OK.”