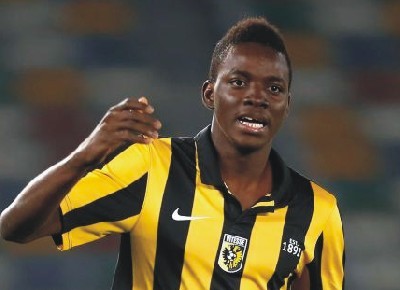 Chelsea’s teenage sensation Bertrand Traore will return to Stamford Bridge after one and a half years at Eredivisie side Vitesse. According to the Dutch website Soccernews, Traore is close to securing a work permit to play in England and will go back therefore to his parent club in the summer.

According to the report, German side Borussia Dortmund were willing to offer more than €10 million for the 19 year-old. Jose Mourinho though, is a big fan of the player and did not want to sell. The manager has big plans for Traore, but whether he is included in Chelsea’s squad for next season’s Premier League campaign remains to be seen.

The Burkina Faso international joined the Blues’ Academy in 2010 from French club Auxerre, at the age of just 14. He signed an official four-year contract with Chelsea in 2013, and featured in their pre-season tour of Asia. In January 2014, he was sent on loan to the Netherlands to be given more first-team football.

After a lukewarm start to his career at Vitesse, he burst into life last season, scoring 17 goals in all competitions and emerging as one of his side’s best players. He scored 14 times in the league and featured in the top 1o in the highest scorers’ list. For a 19 year-old midfielder, that is an extremely impressive return.

It is unlikely that Traore will get too much first-team football with Chelsea next season, considering the fierce competition for the attacking midfield position that already exists at the club. There is a probability that he is sent on loan to either another club in the Premier League or to the Championship. It is imperative for his development that he plays on a weekly basis.

Chelsea currently have on their hands several young starlets who are tipped to make it big in the future. Traore is one of the brightest talents at the club, and Mourinho will want to deal with his situation very carefully, to make sure of his progress, as well as giving him a fair chance to prove himself at Stamford Bridge.