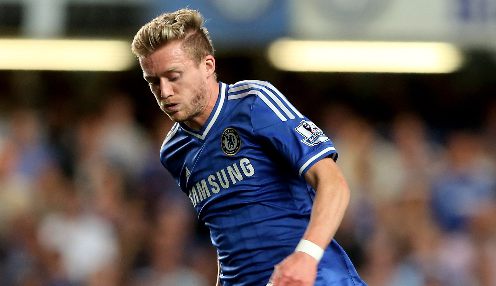 It seems increasingly likely that Chelsea winger Andre Schurrle will leave the club in the January transfer window.

Let me sum up the report from German newspaper Bild:

It claims Schurrle wants to leave the Blues in winter and he wants to return to Bundesliga with Vfl Wolfsburg.

Schurrle has found game time hard to come by this season, with Jose Mourinho preferring Brazilian Willian ahead of him.

The German winger’s father Joachim Schurrle is in London to hold talks with the club. Consultants from Wolfsburg (as per the translation) also flew to London to hold formal discussions with Chelsea over the transfer.

Chelsea have set their sights on signing Juan Cuadrado from Fiorentina, but the Londoners may need to sell players to balance the books. It is thought that Salah and Schurrle could be sold to raise funds for the transfer, although Mourinho has maintained the German winger won’t be sold unless the club receive a mouth-watering offer.

The problem with Wolfsburg is they do not want to spend recklessly in January that could see them breaching the Financial Fair Play rules, however, one possible solution could be of signing Schurrle on loan in January with a view to make the deal permanent in summer.

With only few days left for the transfer widow to close down, it remains to be seen whether Chelsea can come to any conclusion over signing Cuadrado and selling both the players either on loan or permanently.

It’s really unfortunate with how things have turned out for Schurrle – may be a move elsewhere is best for him at the moment.