Chelsea are closing on the signing of Abdul Rahman Baba from Bundesliga side Augsburg. According to German source Sportbild, the Blues have agreed a deal worth €25 million for the youngster, who is looked as a supreme talent by some of the top clubs in Europe.

The likes of Paris Saint-Germain and Juventus were also targeting the 21 year-old, but his next destination looks like being Stamford Bridge and the Premier League. Augsburg signed Rahman Baba for just €3.5 million last summer from Greuther Furth, and are now looking to make an incredible 700% profit on his sale. 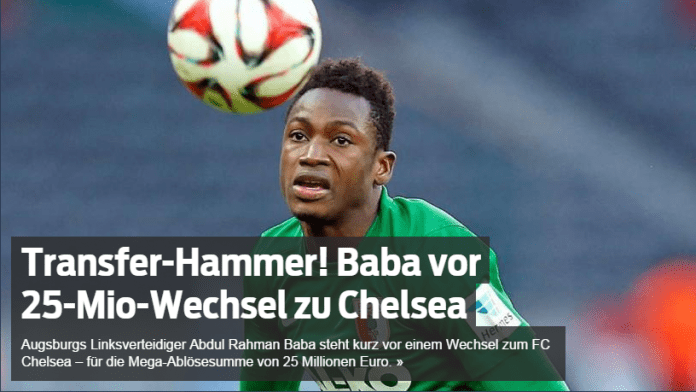 The Ghanaian’s contract with his current club runs out in 2019, and Augsburg are desperately trying to keep him, but a big money move to the Premier League champions is one he just cannot say no to. His career has already got off to a great start, as his 11 caps with his national side prove. Now, the opportunity to play with some of the biggest players in the most competitive league in the world is a big step-up. Also, he will get the chance to prove his worth in the Champions League, among the best of the best in the continent.

Chelsea currently have only one left-back in the squad in Cesar Azpilicueta, who himself is naturally a left-back. Filipe Luis was bought from Atletico Madrid last year but was sold right back to them, a deal that was completed only earlier this week. The Blues have had a quiet transfer window, only spending £8 million to bring in goalkeeper Asmir Begovic. Petr Cech and Luis were both sold for £11 million each, seeing the club earning a net profit until now.

Rahman’s arrival adds strength and depth to the squad, but it remains to be seen how much of a look-in he gets in the first-team next season. Azpilicueta is one of the first names on the teamsheet, and so the youngster will have to be content with featuring only in the cup competitions early on. But if he lives up to his potential, we may see him as a regular at Stamford Bridge for a long time to come.