It’s a race to the top like no other. 4 players are vying to become this season’s Most Valuable Offensive Player (MVOP) in the EPL. The likes of Alexis Sanchez, Eden Hazard and Harry Kane are chomping at the bits to win the title. But at the moment, the title is Chelsea striker Diego Costa’s to lose. 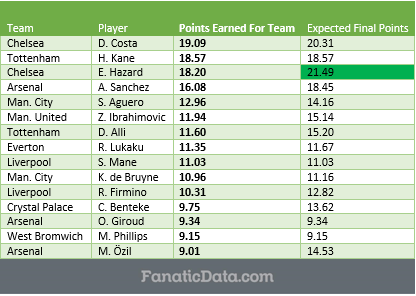 Chelsea fans must be breathing a sigh of relief after Costa returned from his offensive hiatus. Costa had failed to score in the last 5 matchdays causing him to be stuck behind Kane in the MVOP rankings despite Kane being injured. Now Costa is back on top after ending his goal drought this past matchday.

While Costa holds on to the lead, eyes should continue to remain on his Chelsea teammate, Hazard. After another strong performance in the previous matchday, Hazard is inching closer to the top. We had introduced the “Expected Final Points” column in our previous article. This column shows our prediction for the amount of points each player will end the season with based on their past 5 match day performances. With 5 matchdays still left in the season, Hazard might pull off an incredible victory at the end.

We determined the Most Valuable Starting Squad through Matchday 34 utilising the most commonly used formation in the Premier League: 4-2-3-1 (excluding goalies). 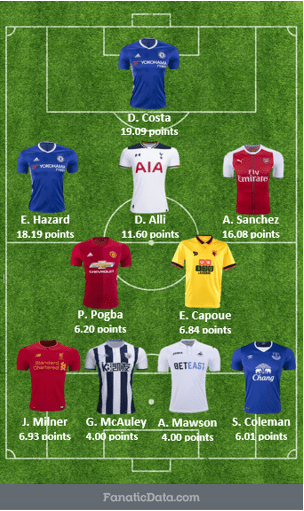 With Diego Costa overcoming Kane in the MVOP rankings, he also overcame Kane as the top striker in the season thus far. Costa had positioned himself as the top scoring striker from Matchday 12 to Matchday 26. Kane had taken over as the top striker and managed to hold on to that role till this past matchday despite being injured for several weeks.

The only other newcomer to the squad is Etienne Capoue who returns as one of the top two central-midfielders in the EPL this season. He was last seen on the starting squad after Matchday 14.

Only two more updates remain including our final one where we announce the winner! The next update for the rankings and starting squad will be after Matchday 34.