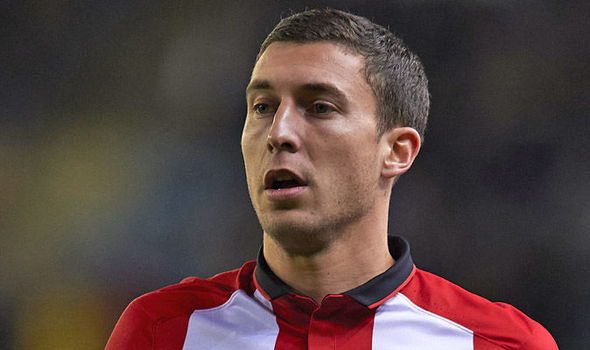 Chelsea are keeping a close eye on Athletic Bilbao star Oscar de Marcos and are considering a January offer for the versatile star, according to Spanish newspaper El Desmarque.

The Blues added four new faces to Antonio Conte’s senior squad over the summer but the Italian coach will surely look to the transfer market again once the January window opens.

Underwhelming recent performances, including Premier League defeats to Liverpool and Arsenal, have led the former Juventus trainer to revert to a system with three central defenders and wing-backs. This formation change looks likely to be permanent and the potential pursuit of De Marcos would suggest as much.

The 27-old Bilbao star is comfortable playing across midfield, but has also been used as an enterprising and forward-thinking full-back by the Basque outfit. As such, De Marcos would certainly be a player in contention for the right wing-back role if he ended up at Stamford Bridge in the new year.

Victor Moses started the last Premier League game in the position and impressed in a 2-0 win over Hull City, with Cesar Azpilicueta used at centre-half. However, De Marcos’ addition would add to the Spanish contingent at Conte’s disposal and offer another impressive option on the right flank.

The report suggests that the 27-year-old dismissed talk of a potential exit from San Mames in the summer but that he has a €40 million (£36 million) release clause in his current contract. Bilbao are notoriously reluctant to part company with their prize assets due to the difficulty in replacing them.

The La Liga side have the internal ruling that only Basque players can represent the club, hence minimising the potential player recruitment pool.

As such, Bilbao have played hardball with both Bayern Munich and Manchester United in recent seasons, with the European giants forced to pay the €40 million and €36 million release clauses of Javi Martinez and Ander Herrera respectively.

The allure of moving to Chelsea may well be there for De Marcos, who has been at San Mames since 2009, but the Blues look set to have to fork out €40 million if they are to land their man.