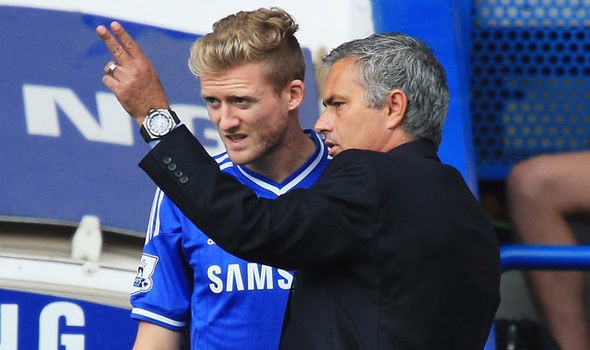 Wolfsburg winger Andre Schurrle has stated in an interview today that the major reason for his departure from Chelsea in January this year was the lack of trust shown in him by Jose Mourinho. The German was a huge favourite at Stamford Bridge and his move to the Bundesliga wasn’t taken too well by the fans.

Schurrle said, as reported here by Sky Sports, “There was a time in my second season when I felt I didn’t have the manager’s trust anymore.

“I don’t know why Mourinho didn’t trust me. It all felt a bit weird to me. It was up and down the whole time. I didn’t get any consistency from the manager, so found it hard to produce my best.

“That’s probably the biggest reason I wanted to leave. It’s difficult for young players at Chelsea because they’re a big team with big stars. It’s not easy to play every match.

“It’s even harder for the wingers as there are only two in the team and Eden plays always, as he’s the best player in the league.”

Schurrle got off to a great start last season, scoring in Chelsea’s first game of the season away at Burnley. With Willian regaining full fitness though, he slowly lost his place in the starting line-up and was forced to be content with the odd appearance off the bench and game time in the cup competitions.

He was sold in the end for £22 million, with the club making a £4 million profit on the amount they bought him for in 2013 from Bayer Leverkusen.

Why Mourinho should regret it now

Chelsea replaced Schurrle with Juan Cuadrado, but that didn’t turn out too well, with the Colombian failing to register a single goal or assist before being loaned out to Juventus in the summer.

Schurrle’s stay in West London was a short one, but his return was extremely impressive. He managed 14 goals in all competitions, and was a constant threat everytime he played. The likes of Oscar and Willian fitted Mourinho’s philosophy and style of play a lot more, but couldn’t match the goalscoring prowess that the German brought to the side. This season, the Blues are in 15th position after 7 games and are struggling for goals from their attacking midfielders. Schurrle would have been the perfect fit in these troubled times for Chelsea.

There have been some very questionable transfer decisions taken by Chelsea in the past 12 months, and selling Schurrle was certainly one of them. While the club’s ability to buy some top stars and yet balance their books by selling players at a profit must be commended, this piece of business has certainly not done them any good.

There were times when Schurrle’s presence in the team made them weaker defensively due to lack of tracking back, but he was a pivotal cog while trying to break down a tight defence. While the current wingers prefer to drop back, collect the ball outside the box and play their way forward, Schurrle used to make runs in-behind the opposition backline.

Do you think Chelsea made a big mistake by letting Schurrle go? Leave your comments down below and let us know.