It has been reported in the media that Chelsea are interested in signing the highly rated young midfielder from Juventus, Paul Pogba and could make a bid in the region of £25m in the January Transfer window.

The price may seem too high for the former Manchester United youngster, but probably if any youngster deserves that transfer fee, it is him. He is that talented and could become a world-class midfielder in years to come. Already he is compared with legends like Patrick Vieira which only gives an indication that how highly rated he is.

Although Jose Mourinho’s first priority should be to land a striker in January, but he can invest the money on other areas too. Here are 5 reasons why Chelsea should sign the youngster in the next transfer window.

Mourinho inherited a Chelsea squad which has gone through lots of transformation in recent years. He would be looking to sculpt the squad according to his own taste. There is already an avalanche of core group of highly talented youngsters at the club and adding Pogba to that list won’t do any harm either. He is only 20 and has a bright future ahead of him.

Frank Lampard cannot go on forever. In fact, he has probably one or two more years left in him before he hangs up the boot. Likewise, Michael Essien is approaching the apogee of his career and he is all but a fading star now-a-days. Oriol Romeu, who is out on loan, has an uncertain future at Stamford Bridge. Further, Mourinho does not see Kevin De Bruyne as a central midfielder either. In that case, if the Portuguese wishes to land a probable world-class talent, what’s the harm in it?

The Frenchman is progressing at a rapid rate, especially now he is getting regular games under his belt. His shots per game have improved, key passes and accurate passing has improved from last season while defensively he has taken his game to a good new level. Take a look at this image taken from Whoscored.com – this kid, can only get better and better. 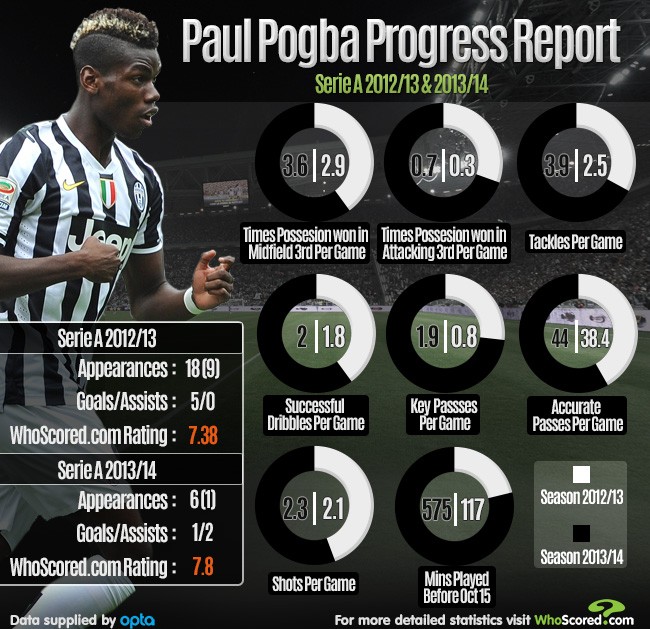 One thing everyone must understand that Chelsea would not be getting (if he arrives) a scatterbrained over-hyped British Kid (with due respect to everyone) who lacks tactical nous to match the demands of modern day football. They are targeting a player who is tactically smart and head and shoulders above than other young central midfielders of his generation.

He can be used as a pivot alongside Ramires. He can be used a typical central midfielder beside John Obi Mikel as well or Mourinho can slowly develop a deadly young midfield duo of Van Ginkel and Pogba for the future.

Mourinho always has a penchant for a dynamic box-to-box midfielder. He was successful with Lampard (early years), Deco (Porto), Wesley Sneijder (Inter Milan) and he might try the same system with Pogba as well.

Do you think Chelsea should go for Pogba in the January Transfer window?