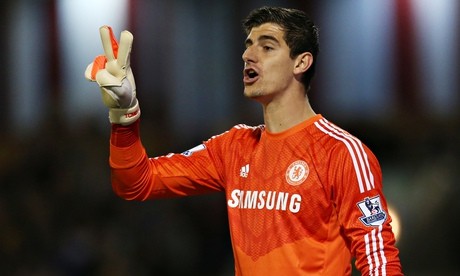 Chelsea goalkeeper Thibaut Courtois has signed a new five-year contract at the club.

The Belgian joined Chelsea in 2011 from Genk but spent three seasons on loan at Atletico Madrid. His time at the Spanish club saw him develop into one of the best goalkeepers in the world.

In his final season there, he won the La Liga title and finished runners up to Real Madrid in the Champions League final. He also kept 20 clean sheets in the league that season, higher than any other goalkeeper.

The 22 year-old then returned to Chelsea and became the fist choice ahead of Petr Cech. After just three games in the Premier League, he has already shown his quality by making key saves in the games against Burnley and particularly Leicester.

He told the official Chelsea website: “I’m very happy with this new deal, it’s really nice to have signed this new contract for five years.

“My future was already sorted but it’s nice to know I’m going to be here for another five years and now I can just concentrate on playing games.”