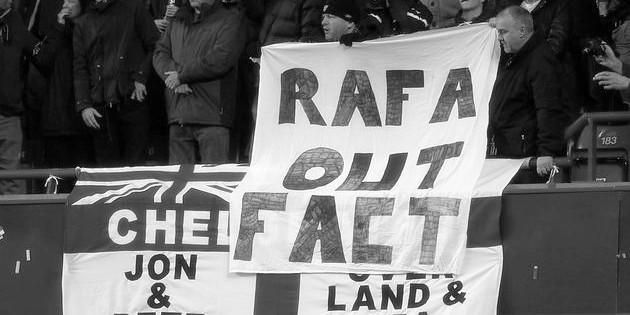 Chelsea Supporters Groups have insisted that they will continue to boo interim manager Rafael Benitez throughout the rest of the season.

The Spaniard was greeted with a less than warm reception for his first game in charge against Manchester City over the weekend and various supporters groups have come out and confirmed that they will not support Benitez and will carry on chanting in favour of Roberto Di Matteo who was sensationally axed last week.

Trizia Fiorellino, Chair of the Chelsea Supporters Group, has said that he and large numbers of supporters want officials at the club to realise that the fans didn’t want him.

As reported on the BBC, Fiorellino said:

“The strength of feeling surprised even those in charge. It was quite venomous right at the beginning.

The fans don’t expect to pick and choose the managers but it was pretty evident there were only two people that were not acceptable in this case – Benitez and Avram Grant.”

However, there are other groups that have suggested booing the manager is not going to help the situation. David Johnstone, a spokesman for the CFC UK Fanzine suggested that booing and criticism was less than helpful.

It is difficult to see Chelsea supporters keeping up booing and chants in favour of Di Matteo for the rest of the season. Chelsea could still win a dramatic treble if they find an unlikely route through to the last 16 of the Champions League and it’s difficult to see any Chelsea fans arguing against further silverware for this season, regardless of what has happened.

The bad feeling is reported to flow from the encounters Chelsea had during Benitez’s time as Liverpool manager under Jose Mourinho. Benitez publicly criticised the club and its fans which is something Johnstone says needs to be explained.

Also on the BBC, Johnstone added:

“I feel it would be best for the manager to come out and fully explain his comments about the supporters. When he was the Liverpool manager, what he said was more than banter.

I don’t think managers should get involved in that kind of thing.”