There were a few indications as to what the starting line-up for Chelsea under Antonio Conte would in their final pre-season game against Werder Bremen in Germany on Sunday. The Blues ran out 4-2 winners but there were more than a couple of uncomfortable moments for them, especially in the second half. Eden Hazard, Oscar, Diego Costa and Pedro were the goalscorers for the visitors, while Claudio Pizarro and Lennart Thy netted for Bremen.

Conte gave summer signing N’Golo Kante his first start, alongside Nemanja Matic in central midfield. Hazard, Oscar and Willian played ahead of them with Costa up front. After going with a modified 4-2-4 formation in the previous games, the manager decided to revert to the more traditional 4-2-3-1.

Chelsea were ahead inside the first seven minutes, when a corner taken short found Hazard on the edge of the area. The Belgian was allowed time and space, and found the bottom corner with deadly accuracy. Two minutes later, the lead was doubled. An intricate passing move involving Hazard and Costa was finished off by Oscar, as the Premier League side’s passing and movement proved too much for the hosts. 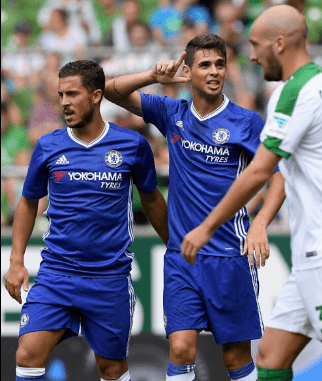 Bremen were afforded a way back into the game though, when Matic committed a foul inside the box and the referee awarded a spot kick. Former Chelsea man Pizarro stepped up, and sent Thibaut Courtois the wrong way to cut the deficit to one. The Germans got much more of a foothold in the game thereafter, and looked good value for an equaliser at one point.

Instead, it was Chelsea who had the last word in the opening half, when a lightning-quick counter-attacked spearheaded by Hazard was concluded with a simple finish for Costa. The Blues went into the break 3-1 up, with the forward having impressed. Kante was also having a brilliant game, covering nearly every blade of grass and getting back constantly to make tackles and interceptions. 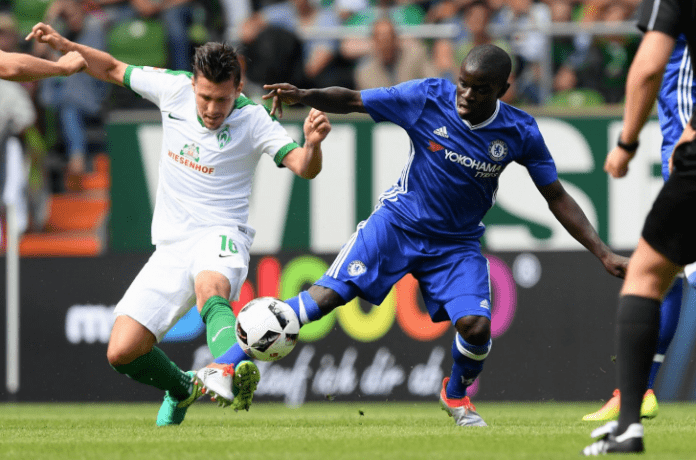 In the second half, Conte brought on Fabregas for Matic and that slightly turned the tide. While an attacking option was added, Chelsea were much more vulnerable defensively, especially through the middle. After a lukewarm few minutes, Bremen pulled another goal back through Thy, who had only been on the pitch for a couple of minutes. The Blues were penetrated through the centre, and the striker found the bottom corner from 25 yards.

In the end though, the home side weren’t able to get the leveller and just like the first half, it was Chelsea who had the final say with Pedro slotting home to make it 4-2 with the final kick of the game.

There was a slight concern for Conte though, with captain John Terry coming off with what appeared to be a knock to the head after a collision with Max Kruse. It remains to be seen just how serious the injury is, and if there will be any lay-off as a result.

With this result, Chelsea finished their pre-season campaign with 4 wins out of 6. They kick off their Premier League season with a home game against West Ham United next Monday.