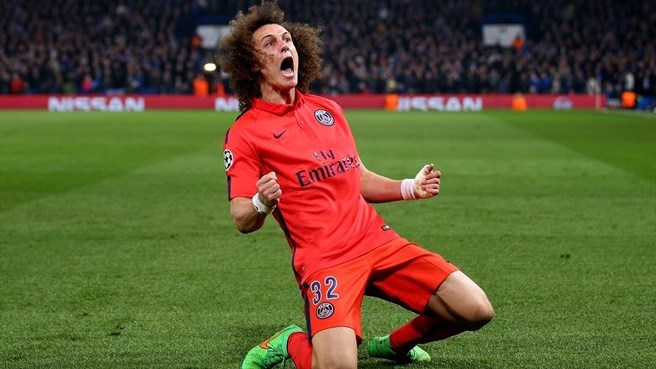 Chelsea’s Champions League campaign came to an unceremonious end following a 2-2 draw at Stamford Bridge against Paris Saint-Germain. The Blues crashed out on away goals following a game that went the distance and needed 120 minutes to determine a result.

Zlatan Ibrahimovic was controversially sent off early on in the second half after a tackle on Oscar, but Chelsea just couldn’t capitalise. Even though they were very poor throughout, it seemed like they would scrape through after Gary Cahill gave them the lead with 10 minutes left. But Chelsea old-boy David Luiz scored with a bullet header to take the match into extra-time. Eden Hazard once again gave the home side the advantage from the penalty spot after a needless handball by Thiago Silva, but the Brazilian then made amends with a looping header that beat Courtois and gave PSG their second and decisive away goal.

Here are the player ratings for the game for both sides:

Probably the only Chelsea player who can walk away from this game with his head held high. The Belgian was assured as always as he collected several crosses with aplomb. He made a stunning save to deny Silva an equaliser, but could nothing with the goal seconds later.

The Serb got into several attacking positions but was unable to contribute anything of note. He got into trouble a couple of times defensively, especially when Edinson Cavani went through on goal on his side. Was at fault for Luiz’s goal, as it was he who was assigned the task of marking his former teammate.

All in all a solid performance by the Englishman, but there are no excuses for how Luiz and Silva were allowed to freely head in the two goals for PSG. His finish for the first goal was one any striker would have been proud of.

The Spaniard was full of running throughout the 120 minutes and played his heart out. He was culpable on a couple of occasions when PSG found too much space on their right flank, but didn’t make any glaring errors.

Another quiet outing for the Serbian. He did well to cover the gaps and spaces in midfield, but didn’t exert the control that Jose Mourinho would have liked. Limped off late on in normal time, and was replaced by Kurt Zouma. Chelsea will hope it’s only a minor injury.

Another big game, and yet another occasion in which Fabregas was invisible. The defensive responsibility is not doing him any good, as he struggled to influence the game. Was well monitored by Thiago Motta and Marco Verratti.

He was in the side for his boundless energy. While he offered plenty of that, his lack of quality in the final third was all too apparent. Missed a great chance to play in Eden Hazard by misplacing a simple pass.

The Brazilian was in the thick of things when Ibrahimovic was sent off, rolling over like he had been shot. Was booked later on in and was withdrawn at half-time.

Hazard provided sparks of his brilliance and on another day, could have had more than the one goal he scored. Put his penalty away with great aplomb.

The Spaniard was lucky to last the 120 minutes after altercations with Luiz and Marquinhos. Had a legitimate penalty appeal turned down following a great run, but didn’t have any clear-cut chance of note.

Had a couple of nervous moments during set-plays. As Chelsea hardly threatened, he didn’t have much to do. Hardly at fault for either of the goals.

The left-back dealt with the threat of Hazard really well with the support of his teammates.

Arguably lucky to be on the pitch following an elbow on Costa in the first-half. He had his special moment on his return to Stamford Bridge when he thundered in an unstoppable header to take the game to extra-time.

An extremely solid performance by the Brazilian, but only he knows what he was thinking when he handled to concede the penalty. More than made amends with a brilliant header which sealed the passage through for PSG.

Neither Ramires nor Willain posed too much of a threat in the wide areas, and the Brazilian full-back was comfortable throughout.

Brilliant midfield performance by the seasoned campaigner, as he helped out his defenders in stifling Hazard, while also keeping Fabregas in his back-pocket throughout.

The tiny yet tenacious midfielder is making a real name for himself. Remained calm in possession, and did his job extremely efficiently. Was literally everywhere on the pitch, and in the middle of everything that happened, as the following pitch-map shows: Was a threat throughout with his incisive runs.

He had the best chance of the match when he was through on goal. After beating Courtois, he could only hit the post from the tight angle. Largely quiet otherwise.

The Frenchman kept the Chelsea backline honest with his constant runs in-behind.

Was very unfortunate to get sent off for a tackle which arguably didn’t even deserve a yellow. Will now miss the quarter-final.