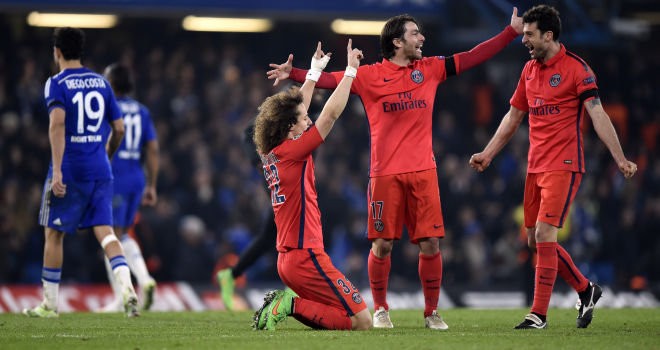 Chelsea crashed out of the Champions League following a dramatic 2-2 draw at Stamford Bridge against ten-man Paris-Saint Germain in the last 16. The game lasted 120 minutes, and swung like a pendulum, but it was the away side, despite being a man down for over three-quarters of the game, who held their nerve. The first leg at the Parc des Princes ended 1-1, and therefore the Ligue 1 side progressed on the away goals rule following last night’s match.

Zlatan Ibrahimovic was controversially sent off in the early stages after a tackle on Oscar, but the Blues hardly made their man-advantage count. After Gary Cahill seemed to have won it for an incredibly unconvincing Chelsea with a volley 10 minutes from the end, the Blues’ old teammate David Luiz headed in a corner to take the game to extra-time. Eden Hazard then stroked home a penalty after Thiago Silva’s inexplicable hand-ball, but the Brazilian made amends with 7 minutes to go, heading in another corner past Thibaut Courtois. This was the telling moment, as Chelsea failed to find an answer. Jose Mourinho, after three successive semi-finals, sees his side crash out at the last 16 stage for the first time since 2009, when Inter Milan lost to Manchester United.

1) Chelsea were complacent, and paid the price:

Ibrahimovic’s sending-off saw Chelsea take it far too easy. It was apparent that they thought this game would be plain-sailing for them, as they failed to create any opening of note. They did have a legitimate penalty claim turned down, but their attacking threat from open play was close to nil. They were playing a dangerous game, hoping to hold out for the 90 minutes, and in the end paid the price. Some extremely poor set-piece defending allowed the visitors to get two away goals, and ultimately dump Chelsea out of the competition.

Jose Mourinho’s decision to play Ramires on the right wing ahead of both Willian and Juan Cuadrado showed that there was more of a defensive approach to this game. The Blues knew that keeping a clean sheet would seal their passage through, but doing this was a high-risk manoeuvre. Had it worked, Mourinho would have been lauded, but seeing that it backfired, his decision to contain rather than attack has come under the cosh.

Chelsea simply got what they deserved.The way they played portrayed their manager.Negativity at home,rarely works.

Mourinho trying to figure out what went wrong with the bus tonight. pic.twitter.com/DQEY8V77eu

3) Incredible show of character from PSG:

Despite going a man down so early on, PSG hardly looked like they were beaten. The ten men on the pitch played like warriors throughout, and matched Chelsea stride for stride. And when the moment came, they struck imperiously. The French side more than deserved to go through following their performance last night, and pose a genuine threat to every team remaining in the competition.

Marco Verratti and Thiago Motta were absolutely brilliant, stifling Cesc Fabregas throughout the game and covering every are of the pitch in midfield, as the following heat map of both players combined shows: 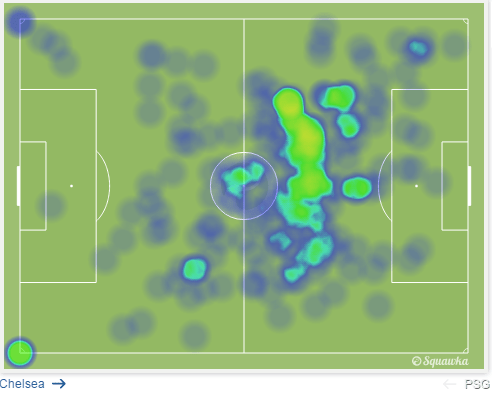 4) Fabregas is a shadow of his former self:

Cesc Fabregas said earlier on in the week that his defensive responsibilities have increased at Chelsea. After an incredible start to his Stamford Bridge career, fatigue is slowly starting to take its toll now. The Spaniard was completely benign last night, and hardly looked like exerting his influence on the game. The following shows his dire dip in form in the last few months:

5) Chelsea need to regroup fast to concentrate on the Premier League:

Chelsea’s season is at a very crucial stage at the moment. Last night’s exit will be a hammer-blow to the confidence of everyone involved with the club. It is very important though, that they shake off this disappointment as quickly as possible so that they can concentrate on winning the Premier League. The Blues are currently sitting pretty at the top, with a five-point lead over second-placed Manchester City. But they need to keep their form up to ensure that the situation doesn’t change quickly.