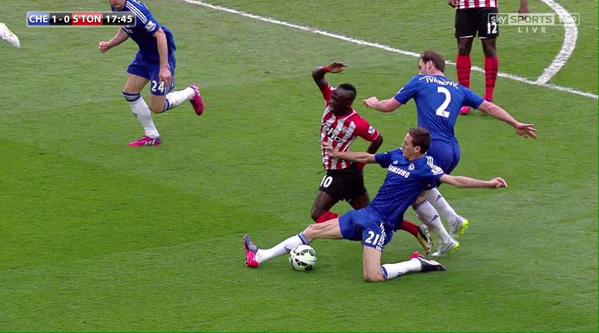 Chelsea dropped two points on their way to the title as Mourinho’s men were held to a 1-1 draw by Southampton at Stamford Bridge this afternoon.

Jose Mourinho’s men started the game impressively looking to make amends after a shocking European display that saw them crash out of the Champions League.

Chelsea took the lead on the 11th minute when Ivanovic found Diego Costa with a pinpoint cross at the far post after a lovely buildup from Eden Hazard. Chelsea’s lead was cut short eight minutes later when Nemanja Matic brought down Mane in the penalty box and Dusan Tadic leveled from the spot kick.

Both teams had their chances to go ahead, nut were undone by two inspired goalkeeping performances from Forster and Courtois.

The Southampton keeper, who is on his way to the Golden glove, pulled off a series of stunning saves in the dying minutes to deny Loic Remy and John Terry from a few yeards out.

Koeman’s tactics worked like a charm as the Saints managed to restrict Chelsea pressing the midfield all game and the duo of Schneiderlin and Wanyama shielded the back four, allowing the creative players to go long and utilise the pace of Mane and Long, who got in behind the Chelsea back four time and again.

Although the dropped points won’t be a blow to Mourinho and his side, Chelsea’s average performance will once again spark a debate as to whether they are good enough to go toe to toe with the European heavyweights.

As for Southampton, Koeman’s men are comfortably sitting sixth in the table three points behind fourth placed Manchester United, who will play Spurs later today.