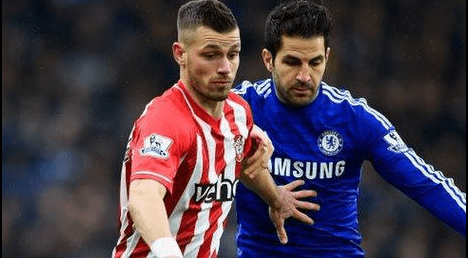 Chelsea missed a chance to go eight points clear at the top of the table, as they could only draw 1-1 at home against Southampton. The Saints put in a resilient performance to hold the Blues for the second time this season, and give themselves renewed hope of qualifying for the Champions League next season.

Diego Costa opened the scoring for Chelsea in the 11th minute, heading in a Branislav Ivanovic cross for his 18th goal of the season. The visitors reacted quickly though, winning a penalty after Sadio Mane was felled in the box by the combined efforts of Nemanja Matic and Branislav Ivanovic. Dusan Tadic scored, albeit rather unconvincingly, to bring Southampton back on level terms.

Chelsea pressed and pressed in the second half, but were unable to break through the Saints’ stubborn resistance.

The following are the player ratings for the game:

Solid performance from the Belgian as he kept out the Saints with some smart yet un-extraordinary saves in the first half. He did get a touch to the penalty from Tadic but blaming him would be a bit harsh.

Brilliant cross for the goal, but was troubled by the pace of Sadio Mane all day.

The Englishman seems to be getting back to his best alongside John Terry. Made a couple of crucial blocks.

Could have and should have won the game, as he volleyed wide from 6 yards with seconds left on the clock. Largely untroubled by Shane Long.

Did get into several advanced positions in the second half as Chelsea pressed for the win. Largely untroubled defensively.

The Serbian was well off-the-pace in this game. There are people who feel he was unlucky to concede the penalty, but the lunge on Mane could have been avoided. Replaced in the second half by Ramires.

The Spaniard had another quiet game, and gave the ball away more than usual. Looked a lot more lively in the second half, as some of his pin-point long-balls were on show. But he still looks a shadow of the player from earlier on in the season.

Worked his socks off as usual, but there wasn’t too much of an end-product.

The Brazilian was largely anonymous throughout the first-half, and struggled to stamp any sort of authority on the game. Had a great chance in the second half to win the game, but his shot was straight at Fraser Forster.

Tried to provide the spark with his trickery, but was unable to do so. Played some sloppy passes that were unlike him.

Looked a lot more like his own self, as he responded to his critics by getting back on the scoresheet. Fought like a warrior, and for once, didn’t get into any trouble.

Made a couple of very important saves to deny Oscar and Loic Remy late on. A very integral part of the meanest defence in the league.

Was in complete control on the right flank, and didn’t allow anything much to get in-behind.

Fonte has undoubtedly been one of the best defenders in the league this season. Another fantastic performance from the captain, which included a heroic block to deny Costa.

Calm and composed whenever call upon. Kept Chelsea out despite an onslaught in the second half.

Put in a solid display against his former employers. Dealt with the threat of Eden Hazard really well.

Along with Morgan Schneiderlin, helped Southampton win midfield in the first half.

The Frenchman yet again proved how good he is with a brilliant display. Nullified the threat of Fabregas and Matic in the first half expertly well.

Undoubtedly the stand-out player of the match. Was a constant threat with his blistering pace. Was brought down for the penalty.

Scored the equaliser from the penalty spot and found a lot of room in the first half. Was substituted in the second half.

Didn’t possess too much of a threat on the right-hand side for the Saints.

Started in his favoured position for the first time this season. Would have liked to score against Chelsea for the fourth successive season, but was well-marshalled by the Blues’ backline.