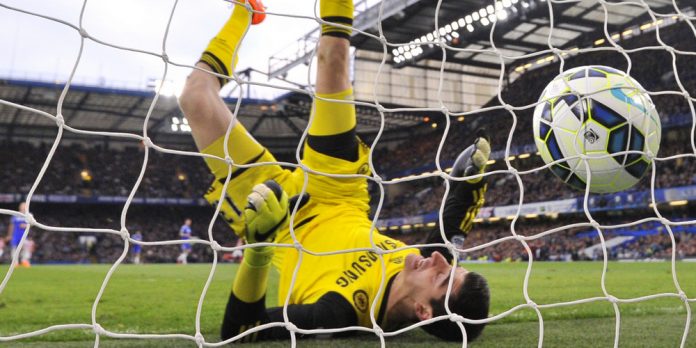 Apparently, were it not for that faint touch from the glove of Thibaut Courtois, Charlie Adam’s power drive from inside his own half on Sunday would have passed clean through the bottom of the Chelsea net, out the back of Stamford Bridge, and would be skimming like a pebble across the English Channel by now. Apparently.

The reaction to the Stoke midfielder’s ‘worldy’ on in Stoke’s 2-1 defeat on Sunday has been staggering, with many proclaiming Adam’s goal as not only the best long range goal seen in English football, but also the best goal outright.

A left-footed ping across 65-odd yards, over the back-pedalling Courtois, and into the Premier League leaders’ net; stunning both home and away support, the previously glazed-over neutrals, and the entirety of social media in one go.

Despite Stoke losing the game, with Jose Mourinho’s side taking another step towards the title, Charlie Adam’s strike will live long in the memory.

But while this writer has nothing but admiration for the Scotsman’s vision, accuracy and bravado in those few seconds of genius, I put it to you that Adam’s stunner was not even the best goal scored against the Blues at Stamford Bridge.

Rewind three years. Chelsea are preparing for a Champions Final date against the mighty Bayern Munich in their own Allainz back yard, and a still Alan Pardew-led Toon are pushing hard for a top four finish, with Papiss Cisse spearheading their impressive run.

A 2-0 loss at home for Chelsea is very unusual, but the second goal scored by the aforementioned Cisse against Petr Cech that evening was nothing short of alien.

Cutting viciously across the ball with the outside of his right foot, the then in-form Senegalese hitman managed to curl the ball up and over the flailing Chelsea keeper into the far corner with as much effort as a reclining kitten.

It was the goal that killed off the Blues, being deep into injury time, and one that sent shock-waves across the country, and leaving pundit Steve Claridge completely speechless.

While we have seen plenty of long range wonders over the years – with efforts from Wayne Rooney, David Beckham and Xabi Alonso springing to mind – a goal such as Cisse’s that day is unique. A goal of such breath-taking ingenuity, of such extraordinary use of both angles and spin.

Adam may get goal of the season for his effort, and I for one reckon he could score it again. Cisse, meanwhile, could surely try that shot 50 more times and never replicate his goal. Does that mean something?

What do you think? Who gets your nod, Adam or Cisse? Let me know your choice in the comments below…