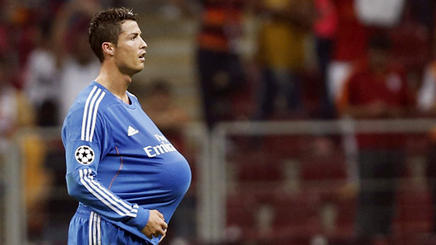 Group A: Rooney on form

The two Manchester clubs displayed impressive form leading into their much-awaited clash at the weekend in the Premier League, dispatching their opponents with consummate ease. David Moyes’ first match in charge in the UEFA Champions League was one to savour, with a Wayne Rooney masterclass earning United a 4-2 win over Bayer Leverkusen at Old Trafford. Rooney’s brace took him to 200 Manchester United goals, while Robin Van Persie and Antonio Valencia netted the others. The other Group A game saw Shakhtar Donetsk beat Spanish outfit Real Sociedad 2-0, with Alex Teixeira scoring both goals. 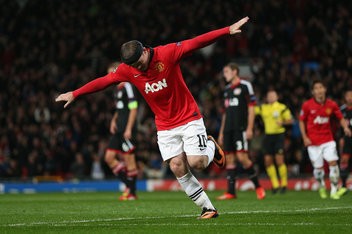 Roo-beauty: Wayne Rooney reached the 200 goal-mark for Manchester United with a brace

Real Madrid were the big winners on Matchday 1 of this season’s UEFA Champions League as a Cristiano Ronaldo hattrick saw them smash Galatasaray 6-1 in Turkey. Summer signing Isco started the rout with a goal on the half-hour mark, while Karim Benzema also notched up a brace.

‘Crist, he’s good’: Ronaldo netted yet another treble, the 21st of his Real Madrid career

The only unexpected result was Juventus’ inability to take all three points from their game at FC Copenhagen. Though the Danish side led early on through Nicolai Jorgensen, it was the Italians who dominated proceedings throughout. They got the equaliser through Fabio Quagliarella in the second half but just couldn’t find a winner despite creating chance after chance. The two-time winners of the UEFA Champions League were denied on several occasions by a heroic Johan Wiland in the FC Copenhagen goal and were forced to be content with just a point.

Group C: Cavani off the mark for PSG

Zlatan Ibrahimovic missed a penalty but his side PSG got their European campaign off to a great start with a 4-1 win away at Olympiacos. Edinson Cavani opened the scoring on his first ever appearance for the French side in the UEFA Champions League, and even though Vladimir Weiss equalised for the Greek side, a brace from Thiago Motta and a late header from Marquinhos was enough for Laurent Blanc’s men to register a thumping win.

Manchester City were just as emphatic as their neighbours United, as goals from Edin Dzeko, Yaya Toure and Sergio Aguero gave them a comfortable 3-0 away win at Victoria Plzen. City have been eliminated in the group stages of the UEFA Champions League in both of the previous two seasons, but that looks to change this time around under Manuel Pellegrini.

Last year’s champions Bayern Munich were in imperious form as they ran out comfortable 3-0 winners against CSKA Moscow at the Allianz Arena, beginning their defence of the UEFA Champions League in perfect fashion.