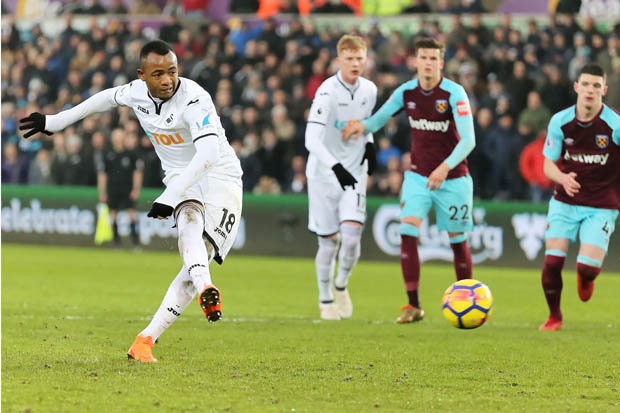 Celtic are interested in signing the Swansea attacker Jordan Ayew this summer.

According to Nana Oduro Sarfo, director of football for Berekum Chelsea in the Ghanaian top flight, the Scottish giants are leading the chase for the attacker.

Apparently, Brendan Rodgers is ready to pay Ayew’s £14million buyout clause. The Celtic manager wants his side to do well in the Champions League and he believes that players like Ayew would help his cause.

Ayew scored 11 goals for Swansea last season and he would be a superb addition to the Celtic side. The player has already proven himself in the Premier League and the Scottish League should be easier to navigate.

According to Sarfo, Premier League giants Liverpool are also interested in the player.

The Reds could use a versatile forward but they will look for someone better than Ayew. The Merseyside giants have been linked with the likes of Dembele and Pulisic.

Sarfo said: “Jordan has had offers from several clubs after Swansea City’s relegation last season. He will surely not play in the Championship with them. Liverpool have shown interest in him but Scottish side Celtic and their coach seem to be serious with their interest. I believe he may go to Scotland looking at how events are unfolding since they want to meet every demand. They speak English just like in England so he can express himself well in there and meet the expectations in the league”.